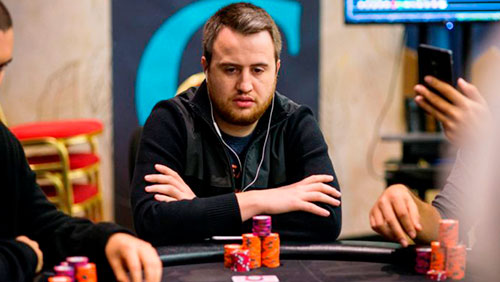 I ask him about the smoke. He doesn’t care. As long as he is winning the money, he will let the foul, invasive stream of death fill his lungs. He thinks I’m asking him if I can smoke. This misunderstanding is why we are currently marching over to the yellow and green cushions in the foyer. I want to sit the man down for an in-depth, 30-40 minute interview under the full glare of the lights. He’s telling me that he doesn’t speak English that well. As the smoke reaches out to scratch our backs, it’s time we found out.

“I was born in Russia,” says Fast. “My parents grew up in Russia and moved to Germany when I was four-years-old, so I don’t know too much about Russia. My parents grew up there, so their mindset was quite…not Russian…but influenced by Russia. We were a German community in Russia, but they got influenced by the Russian government, so their whole mindset was conservative and as I went to Germany with my family and grew up, the whole time was way more conservative than my friends, for example, during school time and afterwards. Now I have changed a lot; I am openminded to a lot of things like poker for example. For my parents, it was a no-go in the beginning –  playing with money, gambling, and all that stuff, they did not get the whole strategy part of poker.”

I ask Fast if his parents grew up with communist ideology.


“Not exactly that, it was the way how people in Russia, in general, talk to their kids and how they behave. There is a lot of societal conditioning.”

Now, we’re on the same footing. You don’t need to have lived in Russia to have parents whose view of the world is shaped by the morning paper and hypnotic rays of the tube.


“My parents wanted me to work hard and have a 9 to 5 job, have a family, build a house, all that stuff. What they think, or thought is best for their life, but of course is not the case for mine.”

I never knew that Fast was born in Russia. I always assumed he was German born and bred. A memory flares up. Sam Greenwood is complaining about the German posse for not sitting in the short-handed games in the Aussie Millions. Fast’s name is brought into the Twitter snarls and grunts. I ask him about if the whole thing was a joke?


“No, he {Greenwood} was serious about it and I see his point that if everyone is waiting, there’s no game starting,” says Fast. “Somebody has to play no matter what, so the game gets started and a lot of gamblers or rich people, for example, they want to see action, they want to have significant numbers. If there’s like three players, for some at least it’s not attractive to play. They want to have 2/3/4 tables, the action going, maybe the blinds are already a bit higher, so it’s easier to go broke and double, stuff like that and it’s closer to the money.

“I think somebody has to start. But in my opinion, it has to be the best players, right, the top 4/5 in the world, or the richest players. I’m neither rich or one of the top 5 in the world, so I have to wait until a game is good enough that the people who are backing me give me the green light. If it’s just about me and my investment, which is smaller than 100k, for example, let’s say its 5k, 10k whatever, I have enough ego to go in and fight, go into the war. But this is just my part of it, and the rest of it is the decision of the stakers, and if I make one mistake, they won’t stake me anymore. We have a trusted business relationship, I trust them, they trust me, it’s a lot of money involved so, I don’t want to make a mistake, so I have to do what they say. If they say I don’t think it’s a good tournament right now, we don’t want you to play, what can I do, right?”

I like the needle. The home game feel of the high stakes poker strata may be appealing to the players, but as a fan it makes me want to puke. It’s to Little House on the Prairie, and I want it to be more like Death Wish. Fast assures me that not everyone is in love.

“Not everyone is buddies,” says Fast. “Some guys are buddies with everyone, everybody’s darling right, for example, Timothy Adams, just a nice guy, no-one could hate him at all, but others, I include myself into it, and others from Germany or the American side are not everybody’s darling. There’s always a bit of back and forth if it’s on Twitter or the table, some needling and stuff like that.”

I ask Fast if he’s talking about personal conflicts or groups.

“No, it’s individual, Fast confirms before going into more detail. “Steve O’Dwyer and I aren’t friends at all.” Says Fast before continuing. “His ego is so big, and of course he has made tons of money, and he still makes money right. He proves it, but the German poker players are coming more from the fundamental side and if you see his game, it’s just awful, that’s our opinion but he still makes money so he can be proud of whatever, but we just keep telling him, at least I do, that his game is really bad.’

I want to know if the needle happens on the table, in person, or passive-aggressively via social media?


“On the table, off the table. I mean I had an interview, it was on the German Wikipedia where I said that I think Steve is the worst super High Roller player in the circuit.”

And he has read it?

“I think he has read it. It is in German but I’m sure someone will show it him, yeah whatever, we are needling each other. He’s doing it a lot on the table. When he is in a good mood, and he is doing that on the table, sometimes I do something, sometimes I’m quiet and listen to music or something. I know I’m not emotionally involved in stuff like that. If he is telling me stuff, like in any sport like NFL, I’m sure they are pushing each other, and then they make a mistake right and then gets a yellow card. I’m not doing these stupid things because he is trying to needle me, but for sure there are some who do not like each other.”

I ask Fast if he spends any time thinking about the role purpose has in his life?

“1-2 weeks ago I realised just playing poker, and learning poker are not enough. I’m now at the point where I could sacrifice a little bit and put some hours of my life into something which is more for other people than just for me. I don’t want to be as selfish as I have in the last years trying to maximise EV for myself, if it’s in terms of money, spending time travelling, whatever right, so doing something good for other people. I have not had that much time, but I have invested 2-3 hours in social soccer tournaments where I am living.

“I am trying to get all the kids together, organise for 30-40 kids, likely a weekly cup and maybe a final so that they can win something. Trying to get some sponsors. I emailed all the soccer sports brands, not Nike or Adidas as they are way too big but the smaller ones who do a lot in the German-speaking areas. So, I did that, and I went to the Government to get permission to use the place, so I am looking forward to that. I think that this could happen and kids of 11/12 years can give me back something, like just the feedback. This is good for me and good for them, when I was a 10-year-old, I would have loved to have someone to organise these cups for us because we had to do that on our own.”

It was nice to hear that Fast is giving something back to the community. It helps turn poker into a vehicle for goodness and gives meaning to the act of sitting down and robbing the man in front of you blind.
I ask Fast how poker makes him feel?

“That’s a tough question,” says a pensive Fast. “How does poker make me feel? As a player, life on the table makes me happy because I love the work on the table. I know at the time I go to the table and sit down, I know I make money, and that’s my job and I know that’s my job, so I feel happy. But the way I have progressed in poker is different than 95% of all the professional poker players. Most start out and maybe a year or year and a half they are sky high, had like a 6-digit bankroll straightaway, and for me, it was 50 bucks, and two years later I had like 200 bucks.

“It took two years playing just micro stakes. For me, it was always a little bit tougher so now I can maybe enjoy a little bit more of the feeling I make money with something I like doing. Then there is the other part, playing online poker and studying, for me this is way more work because online poker and studying go hand-in-hand because you have these trackers and you can watch the hands you played afterwards, so there you can work because if I sit down, it is exhausting for sure.

“Let’s take the Vegas series, it’s exhausting sitting down every day and working, but my body and my mind are used to it. I’m so drained it’s like, no one who’s not able to run for 1 mile would think you could do a marathon right, but if you work on it maybe you can over time. Like I had my first Vegas series in 2013, and I did just three weeks, and I was exhausted, the Main Event I was already crushed, my mind and everything you realise that year after year I did a little bit more.

“Last year I did the whole thing, and I didn’t feel any pain, nothing for me. I enjoyed it; you have so much more experience, you know what you need to do to make it as optimal as possible and squeeze as much money as possible. I love live poker, and this is my biggest passion, so if I study and play online poker it’s all for the future of my live poker game. I’m not studying to crush online high stake cash games for example because that’s not my goal. I wouldn’t enjoy it.”