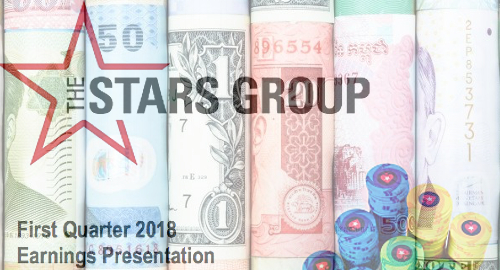 Poker revenue rose 12.4% to just under $246m, although the growth was only 2.3% once you factor out those currency fluctuations. Real-money online poker active customer ranks declined 5.5% to 2.09m during the quarter, in part due to TSG’s flagship PokerStars brand withdrawing from the regulated markets of Australia and Colombia last year.

The poker vertical got a boost from the launch of cross-border liquidity in France and Spain, and TSG announced that its Portuguese-licensed site is expected to join this European Union liquidity pool this month. But TSG now expects Italy, the fourth member of the EU pool deal signed last summer, won’t join the pool party this year.

TSG’s casino and sportsbook revenue (which the company reports as a single figure) was up 55% to $134.5m (39% in constant currency), representing 34.2% of group revenue. The vertical got a boost from TSG’s recent acquisition of Aussie online betting operator CrownBet, which began contributing to TSG’s coffers on February 27.

Looking ahead, TSG maintained its existing guidance for its performance in 2018, although it pledged to update these numbers to factor in its recent acquisition of William Hill Australia and last month’s blockbuster purchase of UK-facing online operator Sky Betting & Gaming.

In Russia, TSG said it continues to monitor the government’s plans to impose payment-blocking mechanisms later this month, but otherwise provided no new information on this market, from which TSG derives somewhere between 5-12% of its overall revenue.

Stateside, TSG confirmed it will apply for an online gambling technology provider license in Pennsylvania when local regulators open up the application floodgates in June.