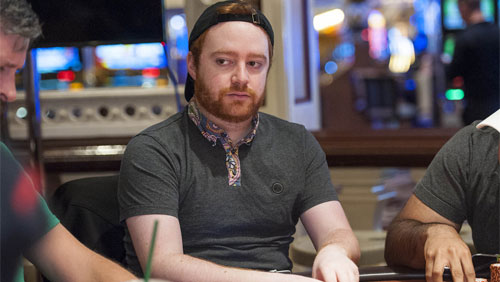 Scotland’s number one poker export joins 888Poker’s 8-Team World Series of Poker promotion and bags himself a Spring Championship of Online Poker title in the first weekend of action.

I’ve figured out the secret to life.

Get a job in Carphone Warehouse.

Paul Potts was selling phones when he made everyone cry singing Nessum Dorma on his way to winning Britain’s Got Talent. My sister works there, and at 39, she still lives with my parents, so that’s a financial result, right there.

And then you have Niall ‘Firaldo87’ Farrell.

The man who quit Carphone Warehouse; withdrew a grand on a credit card and called himself a professional poker player (he was grinding $4 SnG’s), has become the largest live tournament winner in Scotland, is the only player from his nation to win a World Series of Poker (WSOP) bracelet, wins heaps online, and has a live Triple Crown victory under his kilt.

If you’re going to lie in a bunk bed talking to someone about poker, then pick Farrell.

For the longest time, I thought Farrell was a lock for a partypoker ambassador position. Tom Waters and the gang were handing out pro patches like strangers on the Strip hangout whore cards. Padraig Parkinson was ushered in to take care of the Irish. Roberto Romanello was looking after the Welsh. Sam Trickett was the Lionheart.

Farrell was making all the right noises. The Triple Crown winner was playing in their live and online events, he was championing their growth, and yet an announcement never came.

Given Farrell’s incredible talent, you have to assume the man doesn’t fancy wearing a patch. I doubt he needs the money. Maybe he doesn’t care for the work? If I were a betting man, I would assume someone in partypoker towers offered a hand, and Farrell chose not to shake it.

The promo involves six international teams, each captained by an 888Poker ambassador, assisted by a wingman and rounded off with an online qualifier. Farrell joins Chris Moorman as the wingman for Team UK. Each member of the winning team earns a 2019 WSOP Main Event package.

Excited to reveal that I will be wingman to “The Captain” himself, @Moorman1 for the UK “8 Team” at the @WSOP Main Event!

3 spots on the the team and 2 are filled, now all we need is YOU!

Win a package to the @WSOP main event on @888poker for the chance to join us on #the8team pic.twitter.com/jEzUdDahBj

While this in no way means that Farrell is likely to join 888Poker as an ambassador, I wouldn’t rule it out.

The reason I am considering Farrell as joining 888Poker is why participate in the promotion? I know I am mind reading, but if Farrell isn’t interested in becoming an ambassador of an online poker room then why bother with something like the 8-Team?

It will be interesting to see how this relationship develops. The hook up by no means guarantees the pair will work together in the future. Last year’s Team UK wingman, Will Kassouf is now a sponsored pro for Grosvenor Poker, and Team Canada’s wingman, Griffin Benger, remains single.

And Farrell is in fine form.

The man known in online circles as Firaldo87 helped himself to a $219,000 payday over the weekend. Farrell beat 577 entrants to take down Event 3 (H): $2,100 NLHE Progressive KO in PokerStars’ Spring Championship of Online Poker (SCOOP). Farrell earned $101,854 for finishing first, and $118,054 in bounties. Farrell defeated JC Alvarado in heads-up action to take the coveted title, and shift his all-time online earnings over the $3m mark. Farrell has also earned over $5m playing live.

Not too shabby for a man who used to sell mobile phones.