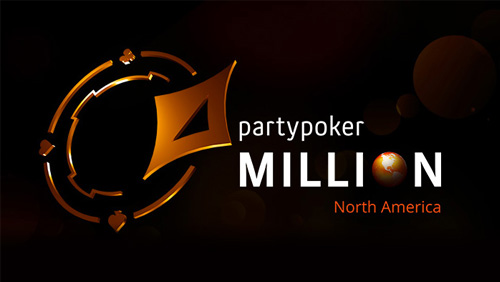 A couple of results to bring you up to speed on from the partypoker MILLIONS North America tour stop including Christopher Kruk winning the $25k High Roller, and Karim-Oliver Kamal taking down the $1,100 Open.

I have two new partypoker tales for you, and one old one. Forgive me for the old one. It slipped through the net like all 50 of the fish that I tried to catch while fishing somewhere near Lake Tahoe.

The plan was to put them back.

I am vegan, after all.

But my nephew wanted to keep one of them so his grandma could cook him a Korean fish dish. I tried and tried to catch a fish for the lad, but I couldn’t do it. Maybe it was the bait. I was using something that resembled Play-Doh because I couldn’t kill a worm and put it on the hook.

“Any luck?” Asked the guy next to me.

What he meant to say was.

“Hey dickweed. Look, I know you’re never going to catch a fish with Play-Doh on the end of your hook. You’re boy desperately wants a fish. I have 50 of the things, because I am more of a man than you’ll ever be. Let me give you one to underline my superiority.”

The man thrust his rod into my face, fish dangling from the hook, flapping for freedom. I just looked at him. He nodded towards the fish, and thrust the rod close enough so I could smell the fishiness. Sensing my inability to remove this fish from the hook, the man grabbed the fin and yanked it off.

Guts shot out of the fish’s mouth.

He threw it onto the ground, and walked away.

The fish flapped about in agony.

“What do you mean?” He replied, his back to me.

I looked at this helpless animal, dying in agony. I looked at my son, still smiling, completely oblivious to the pain of the fish. I picked it up, and started smashing it as hard as I could on the wall to put it out of its misery. Blood and guts splattered over my face. The boy laughed. The man laughed. Had I been alone I would have cried.

One person who makes a living treating fish like that is Christopher Kruk. The Canadian online wizard with $2.1m in online earnings in his bank account, has transitioned to the live scene to great effect recently.

In January, Kruk flew to the Bahamas for the PokerStars Caribbean Adventure (PCA) and earned over $900,000 winning one and making the final table of another $25k High Roller, and he’s done it again, this time with partypoker.

The $234,750 (CAD) Zinno earned for finishing second was his secon six-figure score of the year after finishing eighth in the World Poker Tour (WPT) LA Poker Classic (LAPC) in February for $112,180, and his most significant score since coming sixth in a €25k High Roller at the European Poker Tour (EPT) Monte Carlo for $319,407 back in 2016.

And it wasn’t Kruk that pulled Zinno’s guts up through his throat, leaving him gasping for air in the dirt beyond the rail – it was the dealer. In the final hand, the WPT Champions Club member got it in good 77<A5 only for the board to double pair, counterfeiting his sevens and giving Kruk the title. Kruk also finished ninth in the C$10,300 High Roller, so watch for a deep run from him in the Main Event.