Manchester United will face Chelsea in the final of the FA Cup after both Spurs and Southampton came up short in the penultimate stage of the oldest club cup competition in the world.

Spurs and Southampton players are feeling the same way about now. Let’s start with the first of those two ’S’s’.

Spurs faced Man Utd at Wembley hoping to avoid a record eighth successive FA Cup semi-final defeat. And you couldn’t pick a better time for them to rip the monkey off their back. Despite the Spurs squad having to remove their knickers in the away dressing room, this was home, and they had beaten United here convincingly at the end of January.

It took Spurs 11-minutes to take the lead. Davinson Sanchez sent a peach of a ball down the right wing. Christian Eriksen reacted quicker than Ashley Young, and his rasping low cross found the outstretched foot of Dele Alli.

And it was a deserved lead.

Spurs pummelled United in those first 20-minutes. But Jose Mourinho has built a team that’s as solid as they come.

Then in the 26th minute, just when United needed it, Paul Pogba found some space on the left, and Alexis Sanchez got on the end of the Frenchman’s cross to guide a controlled header past Michel Vorm.

United had more control of the ball after the equaliser. And yet, Spurs could have still headed down the tunnel with the lead after Eric Deir’s low shot took a deflection off Chris Smalling and struck the base of the post as the ref placed the whistle into his mouth.

Watching the second half reminded me of watching old people walking down the street inch by inch, a shopping cart in tow. United was in complete control without the football and looked dangerous on the break. The Spurs players were lifeless, in particular, Harry Kane, who played the role of mime artist to perfection.

Then on the 62nd minute, United put the tie to bed when Jesse Lingard got out of the way to allow Ander Herrera to drive the ball home after some good work from Romelu Lukaku and Alexis Sanchez.

Spurs fans will point crooked fingers at Michel Vorm, who could have done better with both goals, but it was Mauricio Pochettino who selected him ahead of the club captain Hugo Lloris, who watched on from the bench.

United progress to their 20th FA Cup final, equalling Arsenal’s record, and have now come from behind against three of the top five teams (Chelsea and Man City). United fans will also be excited to finally see Sanchez playing at his tireless aggressive best.

Spurs will end the season trophyless once again. That’s zero wins for Pochettino in his time at the club, and while he has done some tremendous work to turn Spurs into a team capable of beating the likes of Real Madrid, you don’t get any points for finishing second, third or even fourth best.

We are about to see how patient Daniel Levy is.

Mourinho will face his former club Chelsea in the May 19 FA Cup Final after the blues beat Southampton in the second semi-final of the weekend. 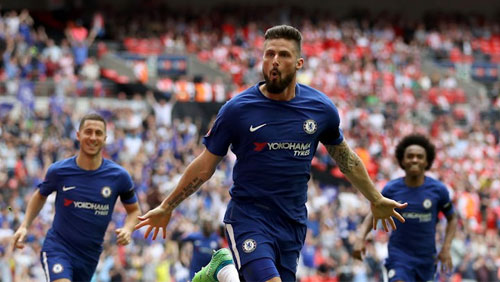 Chelsea, who came from two goals down to beat Southampton 3-2 in the Premier League last weekend, will appear in their second final in two seasons thanks to goals from Olivier Giroud and Alvaro Morata.

The first half was devoid of chances; Willian’s stunner cracking off the bar the highlight. But Chelsea was ahead within 30-seconds of the restart thanks to a brilliant goal by Giroud who has now had a foot or a head in 22 goals in 26 FA Cup appearances.

Eden Hazard burst into the box, played the ball to Giroud and the big Frenchman showed he has feet like a ballet dancer leaving Southampton players like skittles down an alley before poking the ball into an open net.

Everyone in the crowd thought Nathan Redmond had equalised only for his low drive to strike Willy Caballero and go wide, and Charlie Austin had a controversial goal disallowed before hitting the post from an acute angle.

So the Saints had chances.

But this was always going to be Chelsea’s day.

With eight minutes remaining, Antonio Conte replaced Giroud with Alvaro Morata, and the Spaniard headed the winning goal within his first 90-seconds on the pitch, putting away a fine cross from his compatriot, Cesar Azpilicueta.

With Chelsea looking unlikely to catch Spurs in the race for Champions League places, Conte’s future at the club (if he still has one) will likely hinge on winning this famous trophy. Standing in his way is his old foe and nemesis, Mr Mourinho. It will be a cracking.