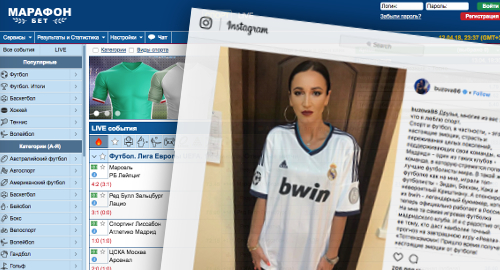 On Thursday, Betting Business reported that Marathon had restarted its Marathonbet.ru site after temporarily suspending operations in early February. The site, which launched in July 2017, originally claimed that “technical reasons” were behind the time out, but admitted last month that it needed to renew its license after changing the location of its “processing center of interactive rates.”

Digital Betting is controlled by Russian billionaire Alexander Mamut, who also owns the sports-themed portal Championat. On Thursday, Championat offered some insights from Digital Betting CEO Dmitry Sergeyev into how Bwin.ru marketed itself in its early days.

Sergeyev noted that Bwin.ru had teemed with three Russian celebrities to promote the brand via their social media channels during the site’s pre-launch registration push. Sergeyev said posts by comedian Aleksandr Revva had boosted Bwin.ru signups by 102%, while posts by singer Olga Seryabkina had resulted in a 115% boost.

However, an Instagram post by model/singer/TV personality Olga Buzova in which she wears a Bwin-branded Real Madrid jersey and offered to give it to the Bwin.ru customer who accurately predicted the first goal scorer in a Madrid v. Tottenham match last October reportedly resulted in registrations surging by 400%.

Last November, Sergeyev said Bwin.ru didn’t plan to go toe-to-toe with Russia’s established online bookmakers in the fight for customers ahead of the 2018 FIFA World Cup. Instead, Bwin.ru would “try to get ahead with the help of smart marketing.” Well played, sir.