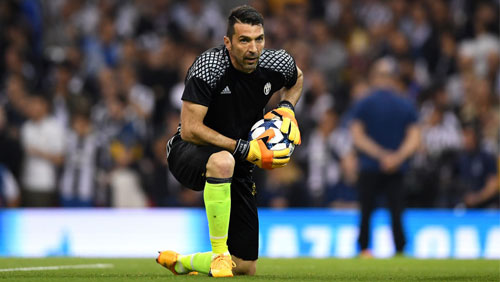 The first round of Champions League quarter-final ties is in the books. Cristiano Ronaldo scores a majestic goal in a 3-0 win at Juventus. Bayern Munich come from behind to beat Sevilla 2-1 in Spain.

Gianluigi Buffon compared Cristiano Ronaldo to both Pele and Diego Maradona after the Portuguese striker scored a brilliant bicycle kick to almost certainly send Real Madrid into the semi-finals of the Champions League.

In a repeat of last year’s final (where Real became the first team to successfully defend the Champions League trophy), Juventus fans were full of optimism. The Spaniards trail Barcelona by 13 points in La Liga, whereas the Italians were undefeated in their previous 25 games. But there is something about this magical competition that turns the Spaniards into Titans, and none more so than their iconic Portuguese star.

It took only three-minutes for Ronaldo to put Real ahead. Isco making room for the cross from the left, and Ronaldo drifting towards the near post to stab the ball home clinically with his right foot.

Juventus could have been on level terms if it wasn’t for the smart instincts of Keylor Navas who kept out a close-range header from Gonzalo Higuain, and Toni Kroos nearly snapped the crossbar in half with a 25-yard piledriver.

But then a moment that will appear on the archaic TV screens of our children’s children. Dani Carvajal crossed from the right, Ronaldo leapt into the air like an Olympic gymnast, and Buffon didn’t move as the bicycle kick settled in the bottom of the net. It was such a moment of majesty, that the stunned Juventus fans began applauding the goal despite the pain it must have caused.

Things got much worse for Juventus when they lost the influential Paolo Dybala for a second bookable offence, and Marcelo made it ‘mission impossible’ for the Italians when he poked home from close range after a one-two with Ronaldo with 18-minutes remaining.

Can Madrid make it three Champions League titles on the trot?

If Ronaldo keeps fit, then, why not.

I’ll give him a hat tip.

The Spaniards, who knocked out Man Utd in the last round, were competing in the quarter finals for the first time. But this is a side that won the Europa League three-years on the trot. Sevilla has appeared on the big stage, and it showed in a classy first-half performance.

Pablo Sarabia opened the scoring in the 32nd minute but then missed an absolute sitter to make it two-nil not long after. The visitors breathed a collective sigh of relief, marched up the other end of the pitch and Jesus Navas prodded the ball into his own net trying to cancel out a Franck Ribery cross. Bayern sealed the win thanks to a 68th-minute strike from Thiago Alcántara.

The result, as hard as it was, was Bayern’s seven successive win, and Jupp Heynckes has won his last 12 Champions League games since taking charge of Bayern for the third time in October.

The Germans face Augsburg on Saturday knowing a win seals the Bundesliga title. Sevilla will be hoping the team is still hungover by the time they meet in their second leg a few days after.