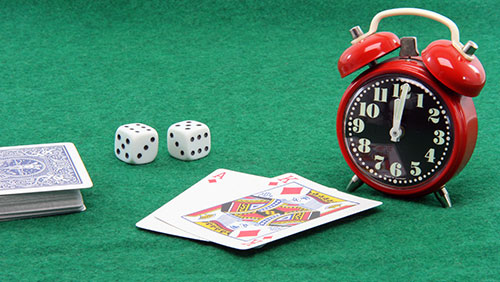 partypoker plan to introduce a shot clock in the Super High Rollers, High Rollers and Main Event of the partypoker LIVE MILLIONS Grand Final in Barcelona.

You have to break a few yolks until you learn to fry the perfect egg. Very few, nail it the very first time, but you have to start somewhere, right? I’m not talking about the Gary Vaynerchuk vogue of failing as fast as you can so you can improve quicker. I’m just saying if you want to learn to fry an egg you have to break into the golden stuff.

Live tournament poker is changing for the good. Before long the changes we are seeing implemented across various factions will become the new state of being, and it’s happening quicker than I thought it would.

partypoker ambassador, Patrick Leonard, has just announced via his personal Twitter feed that partypoker LIVE will introduce the shot clock at selected events during the MILLIONS Grand Final in Barcelona.

Leonard said the clock will be used throughout the entirety of the $25,000 & $50,000 Super High Roller events and will be introduced into the €10,300 MILLIONS Grand Final one level off the money. Each player will receive six-time extension chips worth 30-seconds, and if you make the final table, and have used any of those chips, then you will reload to six. In response to a reply from Max Silver asking if the Shot Clock will be in the €10,000 High Roller, Leonard said the same rules as the Main Event will apply.

The move by partypoker means it’s certain that the shot clock will be a permanent fixture in live tournament poker sooner rather than later. When players experience a shot clock event and then end up in some backwater playing old school live poker, they will want to eat a tarantula.

All For One And One For All

I’m no poker historian, but I am confident the Aussie Millions was one of the first live festivals to use the shot clock in their High Roller events many moons ago.

PokerStars followed suit in the European Poker Tour (EPT) and PokerStars Championship High Rollers before 888Live took the pioneering step of introducing a clock from the start of all their High Rollers and Main Events.

The World Poker Tour (WPT) got into the game when they brought them into High Rollers, and one level off the money of Main Event stops, and earlier this year the World Series of Poker (WSOP) agreed to have shot clocks in the $50,000, $100,000 and $1m buy-in events.

And it’s not only the addition of a Shot Clock that is becoming a permanent fixture in live tournaments. The Big Blind Ante is also coming along for the ride.

It’s Time to Break Some Eggs

When the WPT first tweeted the intention to introduce a Shot Clock one level off the money, Patrick Leonard was one of the people who asked why they didn’t use a shot clock from the beginning, so I asked him the same question.

Leonard explained that partypoker would be sending herds of online satellite qualifiers to Barcelona to compete in the Grand Final, and therefore they felt the need to ease the inexperienced players in gently.

While I value the sentiment, I disagree.

If anyone has qualified for a €10,300 Main Event while playing online; they have experience in making quick decisions. And even if your granddad hopped online one day and luck boxed his way to a seat. Isn’t it better for him to experience the shot clock from the beginning, to get a feel for the speed of things when sitting behind a deeper stack than having to face the clock when one level away from the most significant cash of your career?

It’s the best way to learn.