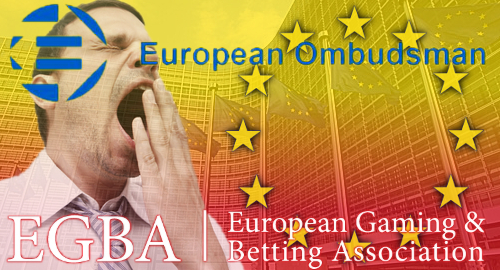 The European Union’s official ombudsman has a stark message for the continent’s online gambling operators: you’re on your own.

This week, the European Ombudsman’s office dismissed a complaint filed in December 2016 by the European Gaming and Betting Association (EGBA) alleging official indifference by the European Commission in dealing with protectionist gambling rules in many EU member states.

The Ombudsman noted that the EC announced last December that it was dropping all pending online gambling infringement cases against member states, saying it was “not a priority” to pursue the goals of the EU Single Market, at least when it came to online gambling matters.

The Ombudsman said the EC “enjoys wide discretion” when it comes to deciding whether or not to pursue infringement cases, and claimed the EC’s decision to drop all pending cases involving online gambling “is covered by this wide discretion.” As such, the Ombudsman says it lacks the authority to tell the EC to pull its head out of its ass (and hey, in that position, it’s not like they could hear it anyway).

In its response, EGBA secretary general Maarten Haijer claimed the Ombudsman’s “disappointing” decision confirmed that the EC’s December decision to wash its hands of its responsibility for enforcing EU trade rules “was a political one.” Haijer pointedly wanted to know who, if not the EC, would restrain the protectionist impulses of EU member states?

Referencing the Court of Justice for the European Union’s recent rebuke of Hungary for its discriminatory online gambling licensing policies, the EGBA noted that Hungary’s Justice Ministry issued a defiant press release the same day, essentially saying ‘whatcha gonna do about it?’ The EGBA is wondering the same thing, and claimed this flagrant disdain “brings into question the authority of the Court and the integrity of EU law.”