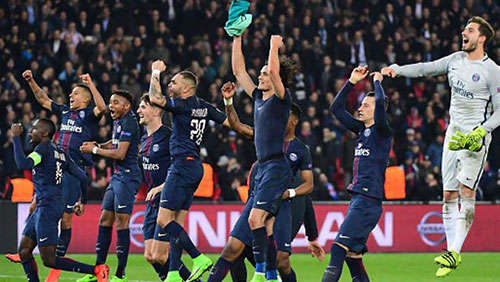 A review of the night’s Champions League action including the champions beating Paris St Germain, and Liverpool joining them in the quarter-finals after coming through their two-legged tie with Porto.

The bookies don’t get it wrong (often). So, when they made Paris St Germain (PSG) favourites to win the Champions League after netting 25 times in the group stages, it made you stop scratching your arse cheek and think.

Was this the time?

Maybe they were playing a meta-game?

Maybe the bookies knew that PSG was never going to win the league, made them favourites, and watched as the punters lumped on them.

PSG was never going to win the Champions League, and I find it difficult to see a time when they ever will. When you are 14 points clear at the top of your domestic league, scoring 86 goals (more than any other European side), you’re not exactly getting the practice you need to compete with the likes of Real Madrid.

When Qatar Sports Investment broke the world record by signing Neymar Jr for £200m in the summer, it wasn’t so they could win the Ligue 1 title (they had done so without him in four of the past five seasons). The Brazilian joined PSG as a Champions League banker.

The most expensive player in the world wasn’t even in the starting lineup last night. Instead, he was sitting in his mansion, with a broken foot lying on the top of one of his naked servants. Neymar Jr won’t kick another football this season.

But it’s a mute point.

A Neymar Jr inspired side would not have beaten the team who has won the past two Champions League titles. Yes, they are not doing the business back in Spain (15 points off the top, losing five games), but they are different gravy in Europe’s premier sporting competition.

The atmosphere inside the Parc des Princes was scintillating, and it was Real who warmed to it the quickest with Alphonse Areola having to pull off two excellent saves to deny Karim Benzema and Sergio Ramos.

When the breakthrough came, six minutes into the second half, it was that man Cristiano Ronaldo scoring his 12th Champions League goal of the season with a towering header. Ronaldo, the tournaments all-time leading goalscorer with 117 goals has scored in each of his eight Champions League appearances this season.

Ronaldo’s goal gave Madrid a 4-1 lead, and things got a little more comfortable when the referee showed Mr Angry Marco Veratti, his second yellow card of the game for dissent.

PSG managed to claw one back when the ball ricocheted into the net off Edinson Cavani’s knee in the 71st minute, but ten minutes later Casemiro’s deflected strike ensured the champions would proceed into the quarter-finals for the eighth successive season.

In the only other tie of the night, free-scoring Liverpool didn’t score at home to Porto (a side they annihilated by five goals to nil in the first leg), but it was enough to put the Anfield side through on aggregate as Porto also failed to score.

Sadio Mane hit the post in the first half, and Danny Ings saw a close-range header tipped over the bar, as Liverpool were unusually miserly in front of goal.