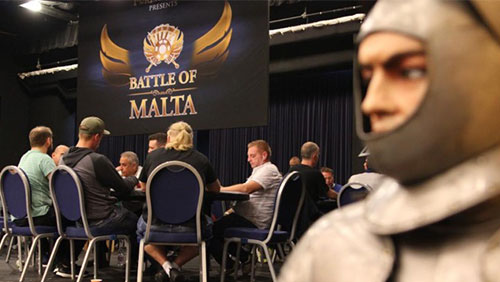 I see a man standing in the middle of an arena. Sand coagulated in blood leaving it a Monkey-brown. There is a whistle in his mouth. He blows, and the operators charge towards the prize – the Battle of Malta is on.

A few days ago, before I made a pinhole at either end of an egg and blew ou

t the double-yolk so I could decorate it for my daughter, I told you that Net Gaming Europe AB, the owners of Highlight Media, who in turn own PokerListings – were selling the Battle of Malta (BOM) brand name, concept and domain name to Malta Casino Limited for €300,000.

It seems someone smelled the scent of weakness in the sale of the great Maltese poker institution.

It was the Cost Rican who created the BOM concept and partnered with PokerListings to turn it into an award-winning show, and the most successful mid-stakes live tournament the country has ever seen.

With her baby passed carefully to the Malta Casino, Montealegre is feeling a little empty. An emptiness that is driving an adhesive sense to do it all again.

According to PokerNews, Montealegre and the Portomaso Casino have taken the BOM blueprint, improved upon it and what you’re going to see soon is the Malta Poker Festival.

The buy-in remains €550, the guaranteed remains €500,000, and the date range is also in the same ballpark Nov 1-6, 2018. PokerListings may have sold BOM, but for the poker community, it will feel like nothing has changed.

There is no definitive schedule for the Malta Poker Festival as of yet, but the PokerNews article states there will side events accompanying the main entree. There is also a website featuring package information. Check it out right here.

“With an operation like the one we have at Portomaso Casino, breaking records for the past seven years, it makes sense to take the tournament to the next level,” Montealegre told PokerNews. “We have been listening to our clients and have recalibrated the entire operation to focus on good quality poker in the most spectacular destination in Malta.”

So, Montealegre gets to the middle before anyone else. How long before Malta Casino Limited join her, and who will be the one basking underneath a lunar glow when the actual Battle of Malta ends?