There’s an up-and-coming female star in the poker world. Even though she first learned poker as a young kid, Cat ‘Catrific’ Valdes didn’t enter her first tournament until October of last year. 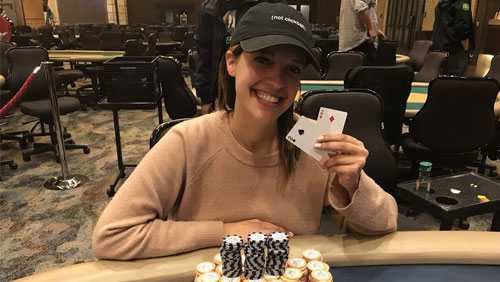 That tournament was at a friend’s house, but the bug bit, and it bit hard. She decided to enter a real tournament a couple of weeks later, sitting down at the felt at the Bicycle Casino in Los Angeles. Valdes lasted until the final table, and chopped the pot with four other players. She only picked up around $500, but it was enough.

Valdes has spent the last seven years making a living vlogging on YouTube. She talks about virtually everything, from getting drunk to why she squabbles with her neighbors. She calls herself a nerd and a fan of strategy games, a skill that definitely helps her at the poker tables. The extroverted player loves what she does. It has allowed her a great deal of flexibility and she’s been able to mix it up with a lot of people she would have otherwise never met.

Her first interaction with poker came when she was still in elementary school. Her grandparents taught her how to play 5-card stud, but she admits she never seriously considered poker to be a life’s goal. Since entering her first tournament last year, she’s embraced the cards with both hands and doesn’t plan on looking back.

Valdes now cruises tournaments regularly at the Bicycle Casino, and will sometimes tack on a tournament at the Gardens Casino in Hawaiian Gardens, CA. This past January, she reached the final table six times and cashed at eight different tournaments. Not a bad way to start the new year, and she’ll more than likely to become a common name within no time.

The 28-year-old has one potential ace up her sleeve. She’s considered to be one of the best looking female players at the tables, and uses her looks to her advantage. Macho men have a tendency to underestimate her poker talent, and she capitalizes on that to make her moves. On more than one occasion, it’s caught her opponents off guard, and brought her significant winnings in the process.

Valdes hasn’t played in any tournament with a buy-in of more than $300. She anticipates moving into that category this summer, and will be brushing up on poker math to try and give her an edge. She’s already off to a good start. She picked up $6,000 with a first-place win at the Gardens Casino this past weekend, outplaying a field of 300 in an event with a $25,000 guarantee.