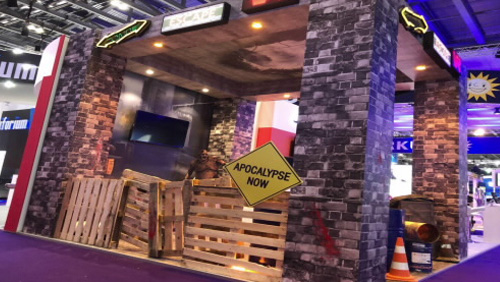 Zombie Escape VR was revealed to delegates today at the beginning of the ICE gaming festival in London for the 2018 edition; ICE is the world’s largest gaming exhibition and conference. Zombie Escape VR iGame joins the groundbreaking and award-winning Kleopatra VR in the unique portfolio of innovative 2D and 3D iGames from Join Games VR Studio. Importantly the game reveal confirms delivery of the second part of Join Games’ strategy in its roadmap for Mobile VR iGaming that breaks the industry’s traditional trajectory.

Firstly it successfully crosses the divide from pure gambling into the territories familiar to mainstream computer gamers, offering the for the first time in Virtual Reality on Mobile Smartphones the opportunity to feel at home in a mission-based set of gameplays that escalate through three different levels.

The major difference is that Players can use the gaming skills they are self-invested in from PlayStation and Xbox console gameplay to win not only the game but to enjoy the thrill of real-money outcomes.

The Join Games designed VR “duality of play” means that Players can have fun completing the mission while simultaneously playing for real winnings. The duality of design extends to more than a two-for-one format in gameplay. This game lifts the cover on other elements of Join Games leading of commercialisation strategy for VR in iGaming, including in-game advertising via multiple screens that can also double for further gameplay from within VR – for example 2D games and VR iPoker, coming soon from Join Games Studio.

Visitors to Stand N4-320 at ICE will be among the first in the world to experience VR via stunning ZEISS optics following the pre-reveal of the device at CES in Las Vegas at the beginning of January. The VR ONE is a premium quality product that puts ZEISS into a commanding position in the market, delivering as one would expect, superb build, glass lenses and vision clarity long associated with products from the German masters of optical technology.

Zombie Escape VR is set in 2029. There has been a dreadful accident in which a military jet exploded over your beautiful city, releasing a deadly gas into the air. The explosion causes physical devastation but the true horror only becomes evident after the gas touches the skin of human beings in the blast zone. They are instantly turned into the walking dead. Beyond saving, their only purpose is to seek human flesh and blood to keep moving – your flesh and blood is their objective. You and your partner have to get into the Zombie Zone, kill them all and come back with the antidote to save the city and the world!

The Zombie Escape VR iGame opens with a welcome screen that allows the Player to orientate themselves and ensure their VR settings are bang-on. With some devices this requires manual adjustment but in the case of the ZEISS VR ONE headset, the calibration with your eyesight is made automatically.

Join Games award for design for user experience within VR came from a combination of the creation of intuitive navigation, and intelligent interaction. There are no hand controllers. The player simply thinks about what she would like the game to do, looks at the object, and if it is interactive it will do that that thing.

The player activates the game via the “Enter & Experience” command, chooses to play as a male or female character and then selects a weapon. The game then enters the story narration that sets the scene with a series of pop-art comic graphics that heightens the player’s sense of anticipation. The narration is delivered in a big movie voiceover style, bringing the player into familiar ‘entertainment’ territory. For players in a hurry there are skip options within the 360 environments. The game features three different voice artists and a soundtrack score written specifically for Zombie Escape.

The game journey continues with a short car ride with further information coming from a woman commander back at control, about the Zombies location and what you need to do to find the antidote. You arrive with a screech of tyres and you are in the blast zone. Here you go into multi-play, selecting the Slots play mode on the enormous building-sized game, while also being made aware of Zombies approaching from all directions. In a fun invention, you can shoot Zombies while the real-money game is still in play!

Hitting the bonus opens another level, arrived at via a short high-speed car journey through a tunnel. When you arrive you a have another bunch of Zombies to dispatch, they are defending a metal chest with the key card to the Laboratory inside. Killing all the Zombies allows your partner to run and grab the key, and then you are both able to access the Lab – where something completely unexpected awaits you both. Survive and you get to do it all again!

Accompanying you throughout the game is a pilot-style ‘Heads Up Display’ giving you constant information in real time about winnings, time, time-in-game, and so on.

In 2017 Kleopatra VR set a series of benchmarks for Virtual Reality design and delivery over cellular networks and via Wi-Fi. In 2018 Zombie Escape VR has raised the bar exponentially higher than Join Games first product, and leads the way to real money gaming in immersive and mobile formats.