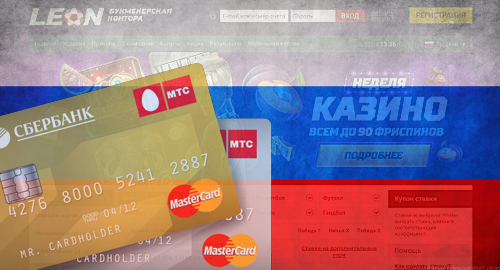 Russia’s biggest sports broadcaster is backing off plans to expand into bookmaking, while Mastercard is back processing gambling transactions for Russian-licensed bookies.

On Tuesday, Russian media outlet Kommersant reported that sports broadcaster Match TV had ditched plans to launch a Match Betting service. The broadcaster, considered Russia’s equivalent to ESPN, launched a tender for a betting technology partner last October, with the hope of launching its betting site in time for the 2018 FIFA World Cup.

Kommersant explained that the broadcaster’s change of heart came following a change in its upper management, with the new bosses reportedly expressing doubts as to the ability of the new venture to be ready in time for the World Cup kickoff in May.

Other sources told Kommersant that Match TV’s bookmaking experiment could be revived at a later date once the new leadership has more time to crunch the numbers and work out an optimal strategy.

MASTERCARD BACK IN RUSSIA
Russian-licensed online bookies will soon be free to pay out customer’s winnings via Mastercard, following the credit card company’s decision to add Russia to its list of countries where gambling-related transactions – using the MCC 7995 transaction code – are considered kosher.

Betting Business Russia reported that the change will be made sometime this year, but Russian-licensed bookmaker Leon is already celebrating, issuing a statement saying the shift “will undoubtedly positively affect the progress of legal online betting in Russia,” allowing Russian bookies to compete with “the best representatives of Western European regulated betting jurisdictions.”

RUSSIA STRONGARMING SITES INTO ACCEPTING MIR CARD
Meanwhile, Russia’s Ministry of Finance is advancing legislation that would force Russian online commerce to accept the new MIR payment card, which Russia created after its invasion of the Crimea and the resulting economic sanctions imposed by the West that cut off access to many western financial service products.

Adoption of the MIR card has been slow, with many Russians not seeing the need to add yet another payment system. Previous legislation exempted online companies whose annual revenue was below RUB40m (US$703k) from being required to accept MIR payments but the new law would reduce this exemption to just RUB5m, theoretically producing a dramatic expansion in MIR’s possible scope.