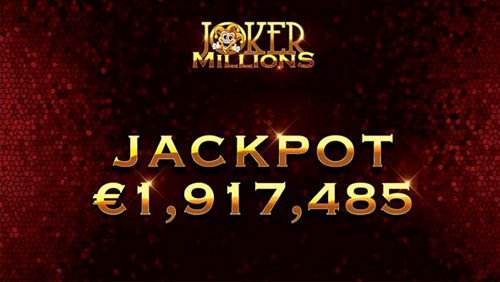 A progressive jackpot of €1,917,485 dropped on Wednesday to a player in Norway using LeoVegas’ mobile site.

It is the latest major jackpot paid out by Yggdrasil, following a €1.12m prize which dropped on Joker Millions’ pool partner, Empire Fortune, in November. Empire Fortune also paid out a €5.2m jackpot last July, the highest in Yggdrasil’s history.

Fredrik Elmqvist, CEO, Yggdrasil Gaming, said: “Yggdrasil consistently delivers some of the industry’s biggest jackpots, and all operators understand the value of offering players the chance to win these life-changing prizes.

“What sets our progressive jackpot slots apart from the competition is the engaging base game, which means that even those who don’t walk away with a prize are still rewarded with an enjoyable experience.”

Karolina Pelc, LeoVegas Casino Director, said: “Nothing makes us happier than seeing our players hit big jackpots, and we are thrilled to be able to deliver another multi-million-euro prize alongside Yggdrasil.

“Yggdrasil slots are always favourites among our customers, and we have found progressive slots titles including Joker Millions have played an important role in enabling us to deliver a world-class casino offering.”