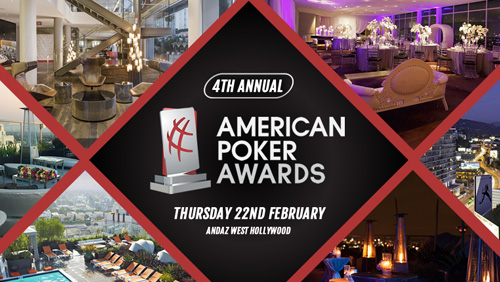 The Global Poker Index has announced the date for the 4th Annual American Poker Awards, and there will be 20 categories to choose from, heavily dominated by poker media content.


I pinned my future poker hopes on Alex Dreyfus’s cravat. His magic pixie dust got me. He was changing things in poker as rapidly as an eyebrow shrug, and all positive.

The delicate, intricate architecture of the Global Poker Index (GPI) and the Global Poker League (GPL) enthralled. There was a polish to everything, and after Season 1 entered the books, I expected more of the same.

Dreyfus’s Twitter account is one of only two that I read on a daily basis. The Frenchman’s interest in esports and blockchain technology sees poker jumping into the sidecar for now. He is a thirsty man, and right now he has his head in the dog bowl of something entirely different.

So it was nice to read, this morning that Dreyfus and the gang haven’t completely forgotten about poker. I know he ran into some unassailable last-minute problems when he tried and failed to organise a 2017 European Poker Awards ceremony. But his partners, PokerStars, have not let him down when it comes to lauding praise on the very best in the American poker market.

The 4th Annual American Poker Awards sponsored by PokerStars takes place at Andaz, West Hollywood, February 22. It’s going to be bigger than ever with 20 different categories.

Looking at the list, you can see how quickly poker is evolving, particularly in the way that we consume poker content, who is producing it and how? These days, issuing an award for an excellent piece of writing seems as old as a chip pan.

These are the new mediums, and on Feb 22, the GPI will honour the very best.

There are three new categories:

• Poker Broadcaster of the Year

You sense that Doug Polk is going to make the short list in those, as is Poker Central/PokerGO.

Here are the rest:

• Moment of the Year

• Industry Person of the Year

• Breakout Player of the Year

• The People’s Choice Award for Poker Personality of the Year

• Tournament Performance of the Year

• Poker Journalist of the Year

• Poker Podcast of the Year

• Poker Streamer of the Year

• Mid-Major Circuit of the Year

• Event of the Year

• Charitable Initiative of the Year

• Award for Lifetime Achievement in Poker

A Nomination Panel and Jury will select the winners. The exceptions are:

If you want to attend the awards ceremony, then follow this link.