No, a Saudi prince did not lose $106.7b playing online poker 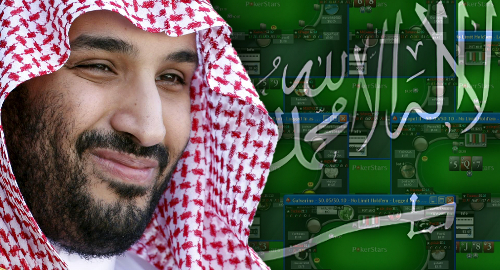 What is it with Saudi royals and outlandish reports of their alleged gambling excesses?

The vast sum the prince allegedly lost neatly corresponds to the amount of shakedown cash the regime hoped to garner in exchange for releasing the dozens of royal family members detained in November for alleged corruption. The ANI report claims that the prince sheepishly detailed how he squandered the funds in an address to Saudi Arabia’s Consultative Assembly.

In decidedly un-royal language, bin Salman allegedly confessed that his epic bad run was the result of a “series of unbelievably shitty hands.” The prince allegedly claimed he’d only intended to play “one quick game of Texas Hold’em but got sucked in and the next thing I knew it was 5am and I was $106.7b down.”

The preposterous online poker details appear to have been inserted into an otherwise routine story regarding this week’s release of one of those detained royals, Prince Alwaleed bin Talal. Either this is by design in a shortsighted bid to boost ANI’s website traffic or the guy who was fired for triggering Hawaii’s incoming missile alert system has apparently found himself a new job.

Last May, a similarly outlandish tale circulated regarding a different Saudi royal abandoning five wives to cover a $359m marker he’d run up during a prolonged losing streak at Egypt’s Sinai Grand Casino.

Sadly, that story was also too good to be true, but the repeated appearance of such stories suggests ISIS’ media teams have opened up a new front in their fight against Arab nations’ governments.