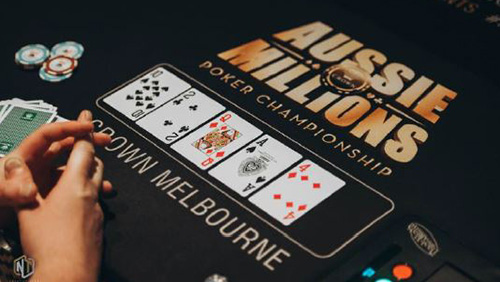 The action-packed schedule will include the official gold bracelet event, satellites and cash games, along with daily tournaments running for 21 consecutive days.

The tournament is Australasia’s largest and longest-running, which includes the coveted Aussie Millions ‘Main Event’, slated to run over eight days from Sunday 27 January – Sunday
3 February 2019 with over 700 entrants and an estimated total prize pool of AUD$7 million. Due to the large number of entrants the Aussie Millions ‘Main Event’ will feature three starting
flights; Sunday 27 January, Monday 28 January and Tuesday 29 January.

Nearly 100 poker tables will be set up across the award winning complex to accommodate the thousands of players from over 35 countries who visit Crown during January to compete for a
share of a total estimated prize pool of over AUD$24 million.

The current slate of individual events offered during the 2019 Aussie Millions are being finalised, with 26 official gold ring events expected and a broad range of other poker variations at both entry level and championship level.

The full event-by-event schedule is expected to be released soon and will be uploaded to https://aussiemillions.com/ with full details.

ABOUT AUSSIE MILLIONS POKER CHAMPIONSHIP
Hosted by Crown Melbourne, one of the world’s leading integrated entertainment resorts, the Aussie Millions transforms Crown into a mecca of the poker world during the peak of the Australian Summer.

Crown Melbourne’s Tournament Director, Joel Williams, said “Crown Melbourne’s Aussie Millions continues to be seen as a ‘must-attend’ on the global poker tour among both recreational players and seasoned pros alike. With a schedule featuring 26 official championship events, 2018 looms as one of the biggest events yet”.

There are few tournaments in the world that offer the kinds of prize pools that the Aussie Millions delivers each year, and in 2018 the schedule will comprise of 26 separate poker events with buy-ins ranging from AUD$1,150 to AUD$50,000. The comprehensive slate of the game’s most popular variations will be on offer and a total of 26 coveted Aussie Millions ANTON Jewellery ‘Championship Rings’ will be awarded to event winners.

The prize pools provide a substantial incentive to travel and, in addition, each winner will receive a ‘Championship Ring’ for their victory. While the entry fees may sit outside the budget of some players, everyone can qualify via the countless satellite tournaments held during the year and during the event itself, offering players the chance to win a place in the coveted Aussie Millions ‘Main Event’ for a fraction of the AUD$10,600 entry fee.

Nearly 100 poker tables will be set up across the award winning complex to accommodate the thousands of players from around the world who attend Asia-Pacific’s largest poker event. In terms of prize money, the prestigious Aussie Millions ‘Main Event’ shares the limelight with some of Australia’s other major events including the Melbourne Cup, Australian Open and the AFL Grand Final.