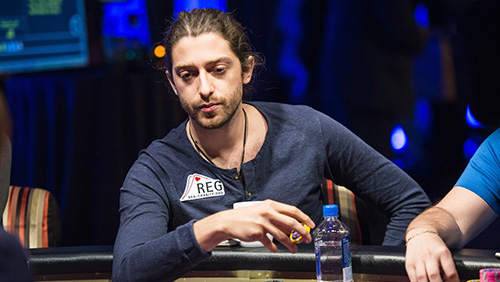 Lee Davy spends ten-minutes with Igor Kurganov during the PokerStars Caribbean Adventure talking about his role with PokerStars, Raising for Effective Giving and more.

You can write a love letter in American dirt, you can boil two boiled eggs, back-to-back, runny, for the soldiers, you can watch the sunset behind the unwanted Bahamian clouds, and you can interview Igor Kurganov.

Somewhere I read about a man during the holocaust who laughed when the Nazi’s burned his books.

“They are all inside of me,” he noted.

I wonder what mysteries live in the mind of Kurganov? How his cerebellum has evolved, creating memories that press play when faced with the difficult questions in life.

There are over 13,000 body parts stored in an underground facility in New York retrieved from the fallen towers. They’re labelled John Doe. There’s a prosthetic leg leaning next to a wet umbrella courtesy of a meeting with a landmine. People laugh at those who refuse to eat cows while donating to charities that want to prevent the sixth great extinction.

But I only have ten minutes.

And so I begin.

I know that Kurganov thinks deeply about life. Mindfulness. There is an Eckhart Tolle energy to him, permeated by the giant clock that hangs on the wall reminding him that he has ten minutes to get back to his seat.

I know that back in the day when the stocks held PokerStars tight. When they had nowhere to run. Kurganov was one of the masses who held a bruised peach in one hand, and a rotten tomato in the other. He threw. They landed. So how does he feel now he is part of the inner sanctum?

“My perception {about PokerStars} had changed prior to working with them. Otherwise, I wouldn’t have joined,” said Kurganov. “I learned one thing while being in a relationship with Liv {Boeree} and seeing how she converses with PokerStars, and it’s true about all companies, the company is not a machine; a group of people run things, and they all have different opinions. I met a few people at PokerStars who were very passionate about poker; were unhappy about some of the changes they had made and had a very good vision going forward. We began sharing this vision in 2017. The PCA has the lowest rake in any year, and we have the fabulous $25k Player’s No-Limit Hold’em Championship coming up, so PokerStars is firing into live events, and I am very happy about that.”

Life is a big Venetian carnival. We all wear masks, poker players more than most. There is a big gap between the person we present to the world and the real authentic self. In that space lies all of the emotions that we paint onto our personality.

We lean on these emotions because without them we are lost. We use them to fuel our obsession with things. More clothes, more cars, more cardboard cutouts of celebrities we crave.

When I’m in the presence of Kurganov I sense a man who has closed that gap. I don’t see a mask. I don’t feel like he’s playing a role. When I look at my compass the needle points right at him.

He is the perfect ambassador for poker.

“I spend more time thinking about poker from a behind the scenes perspective,” Kurganov explains after I ask for his opinion on becoming an ambassador. “I had an interest in how an online poker room operated: What are good and bad tournaments in terms of satisfying the needs of the poker players who want to make money, the recreational players who want to have fun, and the online poker room that needs to make money and ensure everyone has fun. It’s been interesting.”

Some people think that PokerStars is a pile of pants. They crossed a line. Not in a little kid pissing in the fruit bowl kind of way, but in a spilling cranberry juice over your white bed sheets kind of way. I get that. I’ve written one or two things about their behaviour myself. But when you see someone with the integrity of Kurganov picking up the Red Spade you know he’s not just digging for treasure.

You have Igor at PokerStars.

You have Fedor at partypoker.

Two high-stakes poker players who have descended the same spiral staircase of life, one slightly further towards the truth than the other. It’s gym time. Everyone has their backs against the wall. Igor and Fedor stand out front. Rock, Paper, Scissors determines who picks first. Nobody on that wall wants to be chosen last.

Will this stratum of opulence become divided? Will they be forced to choose? Or are they all rubbing their crusted thumbs at the spread that lies before them?

“I think poker players are self-interested and not inherently loyal to any particular company,” Kurganov tells me when I ask him if Stars’ High Rollers could jump ship. “They pretty much don’t care. Whichever organisation runs the better tournament, at the better spot, giving better incentives to the players – that’s where the players will end up playing.  I don’t think it will be a situation of jumping ship or staying loyal to Stars. Currently, it means that for the poker player there is more choice.”

I like it when Igor Kurganov wins a poker tournament. I know a percentage of his winnings is going to go towards making the world a safer place for my children. Maybe that’s he draws me in? If there is a heaven, it’s a densely populated place, but I’m sure there is a bed that has his name on it. It takes a particular type of person to focus their attention on helping others. You can only begin doing this when you start to understand who you are; when you close the gap.

Kurganov helped create Raising for Effective Giving (REG), a non-profit that spreads the tale of effective altruism throughout the poker industry. At the PokerStars Caribbean Adventure (PCA) they did this by hosting a $25k Charity event with the rake going towards the meta-charity. With 2018 set to be the most significant charitable year for poker with the return of the $1m buy-in One Drop I ask Kurganov for an update on this side of his life.

“We {REG} are looking at running a bigger event. That’s partially why we wanted to do – in quotations, a smaller event (it was a $25k buy-in),” said Kurganov. “We didn’t want to offer a high rake like the One Drop does so we ran it as a $25k+$1k. The timing was a little unfortunate. We created it late and the schedule didn’t allow for that many players to play but we raised over $30k. Additionally, in 2017, PokerStars donated some of the rake in the online events: SCOOP and WCOOP and that raised about a quarter of a million for REG. Other than that REG is doing very well. We have been growing every year since 2014. 2017 will be our strongest year with about $3.5m moved. Although we are not running an event as big as One Drop, we will have moved $5-5.5m since the inception of REG which I am very happy about.”

Those are incredible numbers. So many lives saved. So much suffering averted. The poker industry is a unique beast, hidden away like Hogwarts. Once you see it, you cannot unsee it. And as I listen to Kurganov explaining how he and the other REG members continue to carry the torch, I can’t help think of the pioneers who struck the first flint.

“Barry {Greenstein} was great,” said Kurganov. “When I was getting into poker I read his book and saw him as you describe. He put the negative view that certain people have about poker in a different light and it helped motivate me to have a better view on poker in general.”

Are there more Robin Hoods out there?

“Right now it’s a tougher environment,” says Kurganov. “The ‘earn’ a player has over a year is much smaller than it used to be. Players are looking more closely at what they can give. But I believe, and studies show, that just a small donation increases happiness. It’s fair that people are giving less. Even in my group, for example, back in 2011 everyone would want to buy dinner. Then around 2013/2014 everyone was earning less, and over time we were flipping for the bill.”

“Now we’re writing it all down,” Kurganov jokes.

It was a nervous joke. I can see him eyeing the clock. He has work to do. Hands to win. Lives to save. I end my ten minutes where I began. With the patch, he wears proudly above his heart.

The $25k PokerStars Player’s No-Limit Hold’em Championship must be a good thing for an entity like REG, right? Both Kurganov and Boeree have the PokerStars platform, and surely they can sell their views on EA to a broader network thanks to this incredible event.

“It’s not that beneficial to talk about it because it doesn’t often lead to donations,” says Kurganov. “We need donations. The arguments for effective giving are very obvious; we use math and science to determine what the better organisations are. While people agree they don’t necessarily act on it, so we need to focus on that action. We need direct donation options like tournaments, rather than spreading the message.”

And on the event itself.

Is there anything that Kurganov believes PokerStars could do to make the event better?

“We’re still talking about the structure of the event,” Kurganov confirms. “Nothing has been decided yet. There are a group of people working on it, and as long as people have good arguments against these opinions, we will have a great event.”

Players still have the opportunity to shape this event like the curve of a loved one’s calf?

“Yes. Players can post their opinions. If you’re at a live event, find the tournament floor staff, or Neil Johnson or an ambassador and share your views on how we should run the event. If there are good arguments why the event should be a three-chance event, short, deep, etc., all of those things can be considered.”

One more glance at the lock.

I press ‘Stop’ and give him a big hug.

I sit down and reflect. As I do, I see a man with a microphone in hand stop Kurganov in his tracks. He looks at the clock. He looks at the mic. He sits down and starts all over again. As I said, this is a man who has made it a habit of putting the needs of others ahead of his own.