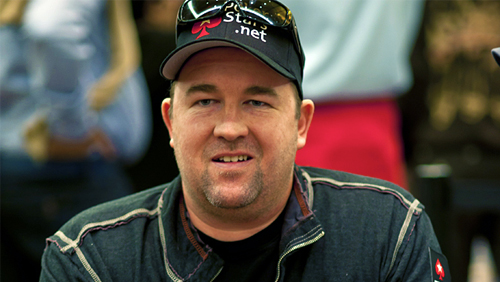 Lee Davy catches up with Chris Moneymaker at the PokerStars Caribbean Adventure to talk about his role with BetStars, how he balances poker and family, and his excitement at the forthcoming $25k Player’s No-Limit Hold’em Championship.

I first noticed it with the Irish. I could tell if someone emerged from a womb cultivated in that part of the world. Welsh, not so much. Perhaps, I am too familiar with the contours.

Then came the poker circus; an opportunity to become a vagabond, locked in a ceaseless bucket list busting adventure around the world. Spanish. French. Italian. Easy. Russians, a little trickier. I round them up into a baseball field in my mind and call them Eastern Europeans.

And then you have Americans.

When it comes to Americans, you can’t get more American than Chris Moneymaker, and that’s a good thing, for him, because it makes him so appealing to the land that creates the greatest poker players in the universe.

And has he trundles over to my table after a photo shoot on the grandest stage at the PokerStars Caribbean Adventure (PCA) he turns into a Captain America like figure, resplendent with tight-fitting lycra, mask, and a shield on his back. Fortunately, by the time he sits down, the lumps and bumps of the lycra have vanished from my memory, and instead, right in front of me, sits one of the most pivotal players in the history of the game.

But does it ever get old?

“It never gets old,” says Moneymaker as he puts his iPad and mobile phone on the table in front of me. “I love the game of poker. I don’t watch as much on TV as I used to, but I still love playing.”

You can’t beat the touch of the deck and the riffle of the chips. Who the hell wants to be in the stands, right? We all want to be on the Coliseum floor ready to take a chainsaw to life.

“It’s all about time,” Moneymaker explains. “When I’m at home I like to spend as much time as I can with the kids. That makes sure when I am back on the road I am nice and fresh.”

Ah, the dichotomy of kids.

You don’t want to die without experiencing parenthood. Who knows what happens when the lights go out? Heaven. Hell. Even reincarnation sucks. Imagine coming back as a fly and having to dine out on a steaming turd.

So you have one.

What’s going to happen 18-years from now when they drop out of school, a degree in the back pocket, unable to find a job. Who’s couch will they sleep on? So, a brother and sister come out and before you know it you’re life is over.

It’s the perfect way to to get away from the real work.

“It’s like any other job,” says Moneymaker. “You get used to it. I’ve been doing this for a long time now. It’s important to recognise that if I weren’t doing this, I would be working long hours in a different job. Thanks to poker, when I’m at home, I get to be a Dad. I cut everything else out of my schedule because I can. I take them to school, pick them up, I am with them all the time when they’re not in school. In six days time, I will be home and will spend the next two weeks with them before I leave again. It’s a nice balance.”

Bruce Lipton’s The Biology of Belief explains how our core values, beliefs and worldview develop before the age of seven. Lipton, a cellular biologist, believes that it’s our environment that acts as the gene-like rudder, and not hereditable forces.

And for a good reason.

Mother nature wants to prepare our offspring for the world they are about to enter amidst the tunnel of blood, vernix and all manner of unspeakable bodily fluids.

So they prepare them by allowing our behaviour as parents to influence their cells in both positive and negative ways.

Theoretically, Moneymaker’s children are excellent candidates for a seat at the table.

“I don’t want my kids to be professional poker players, but I want them to play poker,” Moneymaker explains. “It’s great from a mathematical and social standpoint. They can sit around and develop friendships with people. I always tell people to forget about becoming a pro poker player and instead treat the game as a form of entertainment. Sometimes, when you get into this as a job, you lose the fun factor. Suddenly, it gets very serious, and you become more financially invested. But I’m going to teach my kids to play. And when they come to me and ask to be a pro, I will tell them to get back to school.”

Poker and gambling are inextricably linked. We like to think it’s a game of skill, but the public opinion is a different one, particularly politically. The pair is conjoined, like a hand pinned to the chest of a loved one in a coma.

Not only has God carved him out of the American mould, but there is also a strong hint of sports betting genes about him. Moneymaker looks like a man you will see sitting amid the smoke-filled sports betting room in the casino, jumping up and down, like a 15-month-old baby learning to dance.

“BetStars approached me to work with them, and I snap said yes. My favourite two conversations are sports and poker, so it was a dream role for me. I work every week with them reviewing NFL games. I am 2-0 this week, sick brag.

You have to be at the Atlantis Resort to grasp the enormity of this competition. The walk to the poker room reminds me of the march through the halls of the Rio, albeit a lot longer.

And then you reach the action; dominated by a spider-spacecraft looking final table stage that invigorates every sense, like spontaneous flames from the static of your nightshirt.

It’s a compelling visual narrative from the moment you step out of your cab until the first time you feel a chip. 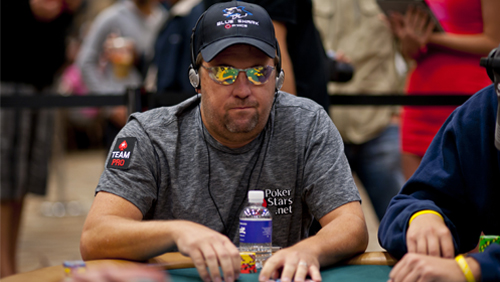 And it’s only going to get better.

“The $25k Player’s No-Limit Hold’em Championship is a different concept,” said an excitable Moneymaker. “They’re giving away 300 seats; they’re adding a million to the prize pool, so you have a $9m bonus. It’s exciting because you will see people from all walks of life playing a $25k event and that’s not something you ever see. It’s very rare that you will see an event like this. Nobody will copy this. PokerStars is putting a lot of money into it, and it’s going to be a phenomenal tournament.

“The fact that it’s going to be in the Bahamas is great. Some people have been here every year, and it’s like, “Ok, here we are again.” But when you come here for the first time, and mix the poker with the location it’s going to be amazing for the newcomers.”

“Is PokerStars giving the players what they want?”

Speaking to Jeff Hakim yesterday, he wasn’t so sure. Hakim preferred the shiny white tooth of the partypoker MILLIONS.

Of course, every player wants something different, making the task of providing value almost impossible.

How does Moneymaker define value?

“When you’re putting together a schedule you have to be thinking about what players want,” said Moneymaker. “You’re not trying to charge them too much. You need to give them opportunities to play different games at different bankrolls. PokerStars does a great job fitting tournaments for every bankroll.

“I have been with PokerStars for 15-years, and they always put the players first. 99% of the time the first question is, “Is this good for the players?” And they take in feedback. Last year, people complained that the PCA Main Event was a $5k event, and now it’s a $10k event. Last year people complained about the number of events, and this year we’ve dropped to 30 something. I think it will change again, ending up in the middle, but the company is listening to people and reacting to players needs. They are paying attention. They are not just sticking with their model. They have changed a lot over the years, sometimes good, and sometimes not so good. They changed the EPT to the Championship; it wasn’t overly a positive thing for players, so they are changing it again. They are a very responsive company for the customer.”

And with that, Captain America shook my hand, grabbed his shield, threw it on his back, and marched onto the next interview.