Finnish star Joni Jouhkimainen joins partypoker to help bolster the team’s presence in the Nordics, and partypoker LIVE add a €50k Super High Roller to the MILLIONS Germany event and raise the guarantee to €12.5m. 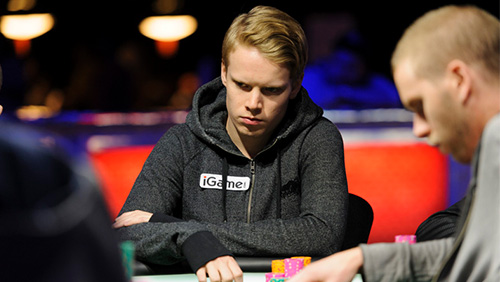 From 18-years of age to 26, Join Jouhkimainen earned $2.5m playing live poker tournaments, and partypoker have rewarded his outstanding results by employing the lad.

Jouhkimainen becomes the 19th member of the partypoker ambassadorial team as they continue to install respected poker-loving professionals in critical areas around the globe.

Thomas Udness, partypoker’s Head of Nordics, is the man responsible for obtaining Joukimainen’s signature. The former PokerStars employee joined partypoker in April 2017 with a remit to grow poker in the Nordic region and immediately set about his task by signing his former teammate at Stars, Johnny Lodden.

The press release that came whizzing my way like a rogue pinball explained that Jouhkimainen spends his time playing Pot-Limit Omaha (PLO). One assumes that’s PLO cash games. In Dec, the Fin finished fourth in the partypoker €2,200 Nordic Poker Championship in Prague for €70k.

Jouhkimainen said his decision to join partypoker was an easy one citing the opinion that they put player’s first.

His most significant score to date came in 2012 when he finished third in the European Poker Tour (EPT) Main Event in Barcelona, securing €404,050.

partypoker now has ambassadors in the following countries:

So what does putting player’s first mean?

Speaking to Jeff Hakim at the PokerStars Caribbean Adventure (PCA) yesterday, he told me that this means layering on the guarantees, so poker players know what to expect before making the trip.

They must have heard him.

partypoker has increased the guarantee for the forthcoming MILLIONS Germany Festival to €12.5m. The King’s Casino in Rozvadov hosts the event 8-18 February, and the bump in prize money will impact the high rollers after the event team agreed to host a €50,000 Super High Roller.

The two-day event begins 12 Feb and carries a €1m guarantee.

The decision to add big buy-in high rollers to partypoker events is an interesting one. There’s no doubt that the evolution of PokerStars Live, and the growth they’ve experienced, comes hand-in-hand with the dominance of the high stakes live market.

Could partypoker take over that role?

And if so, will those loyal to the good ship PokerStars jump ship?