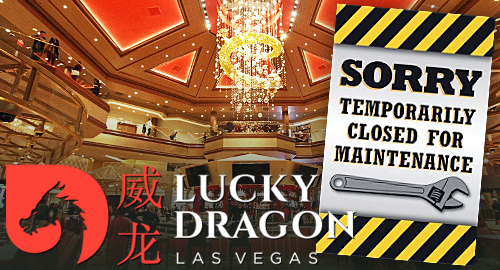 The Lucky Dragon casino in Las Vegas is scaling back its operations a little over one year after it opened.

On Thursday, the Lucky Dragon Hotel & Casino announced that it was “temporarily” closing “all gaming and restaurant operations” as part of a “process of repositioning” the venue. Gaming chip and ticket redemptions can be handled via the front desk, while all future gaming offers are now invalid.

A statement on the venue’s official Twitter account indicated that the Lucky Dragon’s gaming operations are expected to resume “within six months.” The property apparently intends to hire new external partners to manage gaming operations.

The statement went on to say that this “difficult decision,” which will involve an unquantified “reduction in staff,” was necessary in order for the Lucky Dragon “to establish new partnerships that will enhance the property’s long-term positioning and provide a better guest experience.”

The Lucky Dragon, located just off the Strip on Sahara Avenue, had its soft opening in November 2016, marking the first new ‘from the ground up’ gaming venue to launch in Vegas since 2010. From the start, the property was pitched at an Asian audience, with hotel signage featuring Mandarin as the primary language.

Last month, the Las Vegas Review-Journal reported that the Lucky Dragon was already struggling within weeks of its flashy grand opening, clsoing its food court and laying off around 100 staff by March 2017.

The property had identified its target markets as the local Chinese community and those in neighboring Southern California. But Chinese gamblers at other Vegas casinos told the LVRJ the Lucky Dragon’s ‘comparatively stingy gaming and comp policy’ wasn’t winning any local fans.

Lucky Dragon General Manager Jordan Seager defended his property’s comp policy, calling it “in line, or even more fair” than other venues. Seager maintained that, as a new property, Lucky Dragon just needed more time to develop relationships with its clientele.

Lucky Dragon’s Asian theme was reportedly also not winning it any favors with non-Asian clientele, according to some staff, who claimed their non-Asian guests ‘stuck out’ and thus didn’t feel comfortable sticking around.

Lucky Dragon was expected to be among the beneficiaries of the new Vegas-Beijing direct flight service that launched in late-2016. But if Macau’s resurgence is any guide, China’s gamblers appear more interested in traveling closer to home.