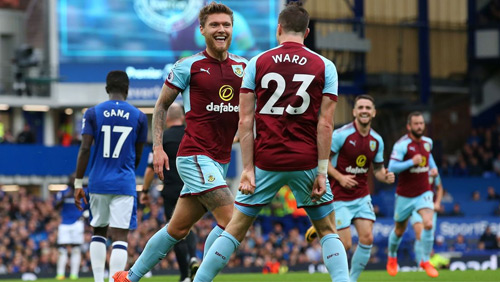 The first part of a midweek two-parter sees Burnley move into a Champions League place after beating Stoke, Crystal Palace walks out of the bottom three for the first time this season with a late, late win against Watford, and Huddersfield loses again, this time to the Champions Chelsea.

If the Premier League were to end today, Burnley would be in the Champions League. Think about that for a second. It’s as absurd at those palm trees you see inside shopping centres.

And it’s not as if they’re hitting a white hot vein of form, slamming goals in, left, right and centre. But here’s the thing with Burnley. They don’t concede goals. With 12 in the Goals Against column, only the two Manchester teams have better rocks at the back.

When Stoke turned up at Turfmoor on a cold and crisp Tuesday night, it was never going to be one for the purists.

“The thing I dislike about soccer,” the American sitting opposite me in Starbucks tells me during our morning tete-a-tete about life, “is the lack of goals. I mean, come on, what’s the point of watching 90-minutes and only seeing one goal scored.”

But that’s par for the course for Burnley.

Before Stoke’s visit, there had only been nine goals scored at Turfmoor all season. Sean Dyche’s side has kept five clean sheets and only conceded three goals. But they have just netted six at the other end, and only Swansea can boast a lousier home goal count.

Coming into this one, Sparky was the 15/8 second-favourite to enter the managerial merry-go-round after the Potters had recorded just 16 points from 16 games, the worst turnout in their history. They have only won two away games in the past 16, and with 35 goals conceded at the back, they are the worst defence in the Premier League.

As I type this, Ashley Barnes has scored an 89th-minute winner in another 1-0 win, Burnley’s fifth 1-0 win of the season. They are the new Arsenal.

The bottom three has a new shape to it after Crystal Palace came from behind to beat Watford at Selhurst Park to move out of the relegation trapdoor for the first time this season.

Palace has been playing like they’ve had the words ‘tired’ stitched into their veins all season, but there has been a new up and at ‘em since Wilfried Zaha returned from injury and it was the former Man Utd dropout who was the difference between the two sides during a crap game of football.

Watford wilted after Cleverley heading into solitary confinement. Zaha saw his shot saved by Gomes, but Sako was on hand to score at the second attempt to equalise in the 89th minute, and the Palace fans became the 12th man when the fourth official signified six minutes of extra time.

Once again it was Zaha who was the troublemaker crossing for James McArthur to score the winner and climb all over West Brom on their way to the fourth rung of the ladder.

Nobody expects Huddersfield to beat Chelsea home or away, but it’s the cumulative effects of the Terriers demise that will be worrying David Wagner’s lords and masters after another defeat.

The newly-promoted side has now lost five of their previous six games after a start to the season that had Huddersfield fans wondering if the Bovril makers were dropping hallucinogens in their half time sup.

Chelsea, on the other hand, moves level on points with Man Utd, although you can expect the Reds to drift further away with a home tie against Bournemouth on the roster for tomorrow evening.