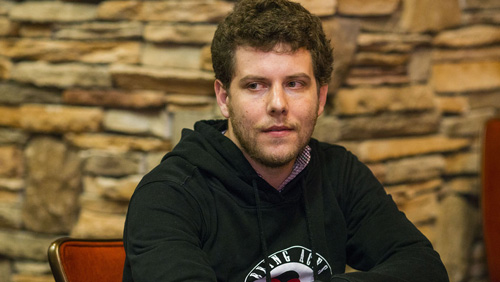 In this week’s episode of Poker Routines, we poke around in the soul of one of Canada’s top live tournament poker players,  Ari Engel.

Ari Engel is a self-confessed workaholic.

What I love about Engel is he turns up everywhere. Small, Medium, Big – it doesn’t matter to Engel; the man just walks in, sets his ghetto blaster down next to his chair, slips his Kippah on, and gets to work making people sweat.

But how does he do it?

Describe the first hour of your day.

I don’t have a routine. I have breakfast in the first hour, and I try to go to gym, but as much as I would like to claim so- it’s not a daily activity for me (yet)

Do you use any tools to aid you in your learning? If so, what are they, and why are they valuable? If not, why not?


Almost all my learning is done talking with people I respect. I do watch some training videos, twitch etc.

Sometimes. My favourites are James Taylor and Cat Stevens

Do you have any pre-tournament rituals or habits?

You have been successful at low, mid and high stakes poker tournaments. What adjustments do you have to make when competing in all three?

Every table I play on requires adjustment as there isn’t a formula for winning in poker- instead it is mental warfare against the particular people one happens to be playing against that day. In general- one can get away with a lot of “obvious” moves in low stakes that wouldn’t work against tougher opponents

What’s your process for learning?

Play, play and a little more play. Most of my gains through the years have come from playing against opponents and picking up things I can use against other players (or seeing weaknesses that I have that they are displaying)

Do you have a location where you tend to find more success? Is this a fluke, or is there a reason?

No, but I have the opposite. I’ve been in Vegas for the full summer since 2006 (before 2011, I mainly played online though) and have never had a “good” summer. I’m confident a lot of that can be chalked up to variance/fluke, but I have a hard time convincing myself that its only luck (or lack thereof)

Have you ever styled your game on someone else? If not, whose game do you admire and why?

I try to take the best of all my opponents. I learn not only from people that are more accomplished than me but also from those that don’t have as much experience. So much to learn- gotta take from wherever I can.

How does tilt affect your game and what work do you do to mitigate it?

Yes- I’ve been working on it since the first day I got seriously into this game (2004). I read/watch all the intellectual reasons not to tilt, I’ve worked with coaches, talked with peers etc., studied psychology etc .

Can you describe the process you use for finding backers or swapping pieces?

I post on social media when I want to sell shares. There aren’t many players (who themselves are willing) that I would swap with. The few that are- they know .

What if anything do you do to move through the gears (A, B or C game)?

Focus on the controllables. Try to be as a professional as possible. Remember that I am my own boss.

What’s your view on using social media when playing poker?

I doubt it’s good- but who can resist the entertainment of stealthmunk going at it with a famous rapper.

How do you keep your mind sharp?

How does “Service” enter your life?

One of the jobs of a pro poker player is to make sure that everyone (especially people that aren’t expected to make money off the game in the long run) has a good entertaining time. Off the table, I try to help people that I like when I can without too much stress to myself.

What great life habits do you have that the world may not be familiar with?

Humbled/ bad/good. Humbled most of the time- because as good as one thinks they are… you will still lose the vast majority of the time. Bad sometimes- because I’m a competitive person and losing isn’t fun, even when you know it’s the expected outcome. Good, a lot. I came into the game with a three-figure bank account, and six figures in debt (from college)- this game has been pretty good to me and anytime I’m not too tilted to see the big picture- it’s easy to be happy about this game.