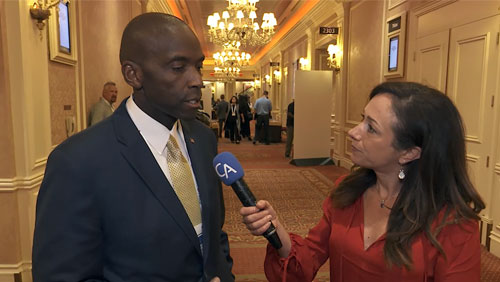 In this interview with CalvinAyre.com’s Becky Liggero, Terry Johnson of Nevada Gaming Control Board talks about how gaming regulators wrestles with pot policies.

The Nevada Gaming Control Board has a juggling act to play in the Sin City.

The board, with its hands already full with the day to day business of ensuring that gambling businesses are compliant with state regulations, has to wrestle with the Nevada’s pot policies now that the state allow the sale of recreational marijuana to adults 21 and over.

Las Vegas, known worldwide as the Sin City, surprisingly wants to stay away from marijuana use and regulators want to keep it that way. Marijuana sale is legal in Nevada, but for now, public consumption is banned.

“We want to make sure that there will be no co-mingling of cash between the gaming industry and the marijuana industry, because the latter cannot use the traditional banking system,” Terry Johnson of the Nevada Gaming Control Board told CalvinAyre.com. “All our objectives are geared toward maintaining the gaming industry in Nevada as viable economic force.”

The $13 billion industry don’t want to get caught in the middle of a crossfire between federal and state should the conflict on pot use arises, according to Johnson.

“That’s actually the biggest challenge that we’re facing is the differing perspectives that we are hearing from Washington during the campaign, we heard that it is a state’s right issue. Now we are hearing that the Justice Department convened a committee to examine the cold memorandum, whether it will main in effect as it is under the Obama administration,” Johnson explained. “So it is difficult for us to gauge what is going to be the policy, and as a result we have to act in a way that reduces risk. So in that area of uncertainty, we want to reduce our risk that the gaming properties would be caught up in any adverse actions.”

The board member also noted that state regulators have to anticipate possible issues with the patrons, including pot use in casinos and hotel rooms, as well as delivery of marijuana in the premises.

The state regulator, according to Johnson, also have to deal with pot use of some of the 120,000 registered gaming employees in Las Vegas, especially when it comes to questions whether they can use marijuana medicinally or recreationally, or both.

Finally, Johnson said they also have to deal with issues with third parties of vendors, of contractors, other persons who might offer other businesses on the gaming establishments.