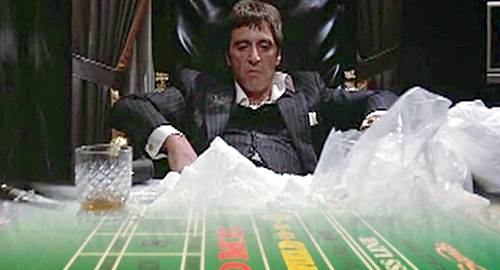 The gambling industry currently has enough public relations problems without gamblers scoring spectacularly embarrassing own-goals, but it seems every family has its share of Fredos who just can’t help themselves.

Such as Brooklyn resident Qing Ben Zhu, who was arrested Monday in Pennsylvania for having the damn good sense to snort lines of cocaine at a Sands Bethlehem casino gaming table in full view of casino staff.

Local media reported that casino surveillance observed the 44-year-old Zhu powdering his nose at a baccarat table at the ungodly hour of 7:30am, which means he was either using the blow to ward off sleep or he was getting an early start and the casino only had decaf coffee on hand.

When Zhu got up to go to the bathroom, he was followed by state troopers, who observed a white powdery substance on Zhu’s upper lip. Challenged by police, Zhu threw a container of white powder into the bathroom sink, and this powder later tested positive for cocaine.

A search of Zhu’s person found that the gambler was holding over 74g of coke, which is a whopping 2.6 ounces, or, since Asian gamblers are obsessed with the lucky number eight, over 21 eight-balls. Sadly for anti-gambling campaigners, Zhu was a powder puff rather than a rock hound, otherwise they would have finally found a justifiable occasion to trot out their ‘crack cocaine of gambling’ trope.

Zhu was definitely stupid to reenact certain scenes of Scarface in one of the most closely monitored environments on the planet, but he has a rival in the Chinese gambler who threatened to burn himself alive if an online gaming site refused to reimburse him for his losses.

Shanghai Daily reported that the gambler, identified only as Xu, had racked up an RMB 800k (US $121,500) debt by playing at an unidentified online card site. On August 13, Xu strode into the gaming site’s office wielding a hammer, a can of gasoline and a lighter, then proceeded to douse himself with the gas.

Claiming to have driven “3,000 kilometers” to get to the office, Xu threatened to light himself on fire if the site didn’t refund his gaming losses. But the staff didn’t make with the money and Xu didn’t make good on his threat. The unburnt Xu later told police that he “just wanted to scare” the gaming site’s staffers. If Xu never found a use for that hammer, perhaps he can use it to beat some sense into his head.