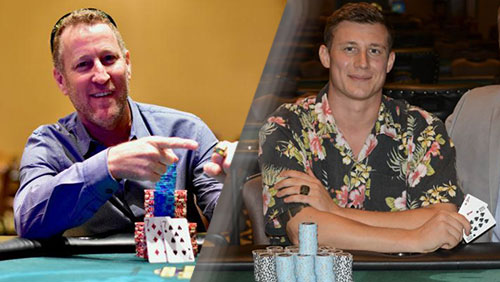 News from the World Series of Poker Circuit at the Seminole Hard Rock in Hollywood, Florida, including victories for Joseph Gotlieb and Anton Wigg.

Would you rather be waking up to the nine to five grind, picking apart cell phones for a living, or rolling out of bed when you want, living the life as a live poker grinder?

Joe Gotlieb had that conversation with himself a few weeks ago.

I can almost see the 52-year-old in his underpants, staring in the mirror, toothbrush hanging from the side of a foam-filled mouth, spitting in the sink to make room for a little Eminem:

“Look, if you had one shot or one opportunity to seize everything you ever wanted in one moment, would you capture it or just let it slip?”

That one shot turned out to be the World Series of Poker Circuit (WSOPC) $1,675 buy-in Main Event at the Seminole Hard Rock, Hollywood, Florida, and he captured it.

904 entrants created a total prize pool of $1.3m, and Gotlieb now has a poker bankroll of $257,638 after winning his once in a lifetime opportunity to become a full-time grinder.

“This was my shot,” Gotlieb told WSOP reporters after his incredible win.

Before Gotlieb banked the cash and donned the diamond-encrusted gold ring, he had to make his way through a formidable final table. The King of Tea, Brian Hastings, emerged from retirement, shedding any ring rust to finish in fourth. And Gotlieb faced the World Poker Tour (WPT) Champions Club member, Asher Conniff in heads-up action. Conniff began with a 92bb v 58 bb chip lead, but Gotlieb managed to poke his neck out front before winning in a flip 77>AK.

Gotlieb is a former chess prodigy and math wizard.

I think he might have just found the perfect career.

Now it’s time to parlay that one shot into a WSOP bracelet. Gotlieb gets that opportunity after winning a seat into the season-ending Global Casino Championship.

Talk like that often means an exit strategy is in the pipeline. If it is, winning events like the WSOPC $3,250 buy-in High Roller is certainly in the blueprints.

Wigg, 30, from Stockholm, was the only player to finish ITM who did not hail from the land of the stars and stripes. The former European Poker Tour (EPT) Main Event and PokerStars Sunday Million winner, earned $111,719 for his victory, his second-highest score since winning that EPT title back in 2010.

Wigg has now earned $2.2m playing live and $7.5m playing online in a career that spans a decade.

Online Poker: How to Take Charge of Your Game With Tips From the Very Best
Lee Davy
15 October 2013

Mixing it up With Anton Wigg and the Deadly Viper Assassination Squad
Lee Davy
10 July 2013
.