Police in Las Vegas are investigating reports of a gunman who opened fire at a country music festival near the Mandalay Bay Resort and Casino on Sunday night. 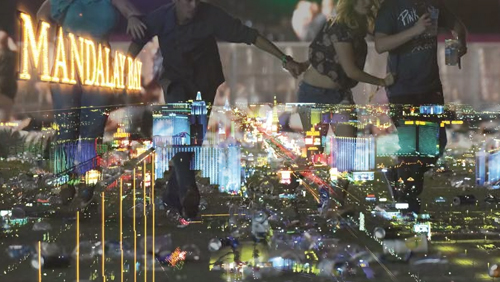 At 5:33 a.m., LVMPD said the death toll has climbed to 50 while approximately 406 others were taken to area hospitals following the shooting. Among the deceased was an LVMPD officer who was off-duty at the time. Two on-duty officers were also injured, one of whom was upgraded to stable condition while the other sustained non-life threatening wounds.

Investigators said Paddock opened fire on a crowd of more than 22,000 concert-goers from his hotel room on the 32nd floor of the Mandalay Bay Hotel at about 10:08 p.m.

Police has already opened Flamingo Road to traffic, but Tropicana and Russell Roads remain closed at the time of the report. Hotels are also open for traffic except Mandalay Bay, police said.

Several media outlets reported that at least one person was seen firing multiple rounds from an assault rifle at the conclusion of the Route 91 Harvests Music Festival. Initial shots were reported around 10:30 p.m., according to News3LV.

“Confirming that one suspect is down. This is an active investigation. Again, please do not head down to the Strip at this time,” the police department tweeted.

Among the concert attendees was professional poker player Dan Bilzerian, who posted a video on his Instagram where he described how the shooting unfold, including how a girl was shot in front of him.

“Holy f–k this girl just got shot in the f–king head,” Blizerian said on his Instagram story. “So f–king crazy…So I had to go grab a gun, I’m f–king heading back…Some kind of mass shooting…Guy had a heavy caliber weapon for sure…Saw a girl f–king get shot in the face right next to me, her brains f–king hanging out.”

Several people have already been sent to the University Medical Center Trauma, and the Las Vegas Metropolitan Police Department has closed traffic from Tropicana Avenue to Russell Road. Some flights have also been diverted from Las Vegas McCarran airport while the incident and investigation continues.

The shooting occurred on the eve of the Global Gaming Expo (G2E) Las Vegas, the three-day international gaming trade show and conference organized by the American Gaming Association (AGA) and Reed Exhibitions.  The expo is scheduled to take place Oct. 3-5 at the Sands Expo, and we are urging everyone to be vigilant and stay safe.

“G2E annually welcomes 26,000 visitors and is scheduled to open, as planned, today with the G2E conference program, while exhibitor move in continues for the show to open tomorrow. The AGA and Reed Exhibitions will be in constant contact with local and national law enforcement and our host, Las Vegas Sands. We will closely monitor the situation and safety remains our priority,” Freeman said in a statement.