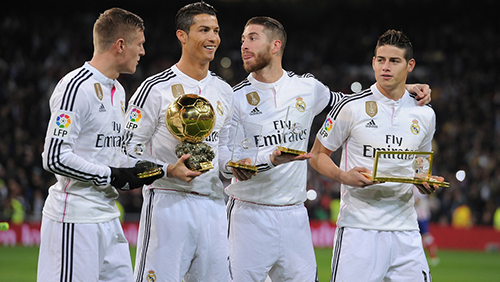 A round-up of the first night of Champions League action including victories for Real Madrid and Spurs, and another draw for Liverpool.

The champions continue their strong start to the campaign with a storming away win at Borussia Dortmund. The 3-1 win means they have now scored six goals in their first two matches as they attempt an unprecedented third Champions League triumph on the spin.

Once again it was Cristiano Ronaldo who was the match winner. The Portuguese star now has a record 107 Champions League goals after netting a brace in the Westfalenstadion.

Dortmund, who lost 3-1 to Spurs in the opening game, have now conceded six in two and will have to stop looking like they are playing with beachballs if they are to escape from this challenging group.

rner. The Welshman then turned provider to put the ball on the proverbial plate, and Ronaldo ate it up.

Pierre Aubameyang gave Dortmund hope when he netted at the near post, four minutes after Ronaldo had given the Spaniards a two-goal cushion, but in the 79th minute, the four-time Ballon d’Or winner romped into the box from the left and smashed an unstoppable shot past the Dortmund keeper at the near post.

Spurs are slowly getting into their Champions League groove after several unflattering seasons in the top flight.

Mauricio Pochettino’s men began the campaign with a superb 3-1 win at home to Dortmund, and they hammered another three past the group’s whipping boys, Apoel Nicosia in Cyprus.

Harry Kane once again underlining his world-class status by scoring a quite magnificent hat-trick to put Spurs on level par with the Spanish champions, and wrest control of qualification away from dangerous Dortmund, although it’s very early doors.

You can get 10/1 for Man City to lift the Champions League trophy. Given that Pep Guardiola has won the competition twice, and Man City has now scored 27 goals in all competitions this season, it’s a decent bet.

Kevin De Bruyne opened the scoring in the 48th minute, sending a screamer into the top right-hand corner. Sergio Aguero fluffed his lines in the 71st minute when he missed a penalty, but Raheem Sterling was on hand to finish the job in the 90th minute. Sterling has now scored six goals in his last five games.

In the other group game, Napoli defeated Feyenoord by 3-1.

City should win this group easily, leaving the Italians and the Ukrainians to fight it out for the second qualification spot.

Liverpool drew their fourth match in all competitions, and second in the Champions League, after returning from a trip to Russia with a point.

Liverpool should have taken the lead in the 17th minute, but the Russian keeper tipped Firmino’s close-range header around the post. Six minutes later and the Russians made them pay for that miss after Fernando curled a fabulous free-kick into the top corner.

Liverpool displayed that black and white bulldog spirit and bit back before the end of the first half. Philippe Coutinho playing a beautiful one-two with Sadio Mane before scoring his second goal in the past two games since putting his Barcelona dream move behind him.

In the group’s other game, Sevilla smashed three past Maribor in a match that was always going to belong to the team sponsored by PlayWSOP.com.