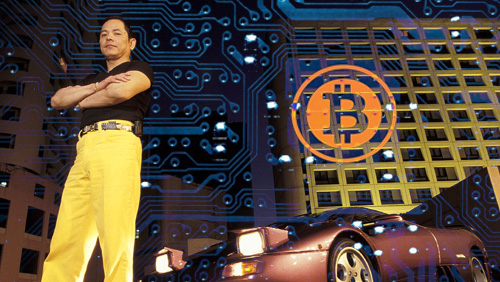 Wan Kuok Koi, the former leader of the notorious 14K Triad, is reportedly cashing in on the cryptocurrency craze.

Macau gaming company Dragon Corp. announced early this week that it plans to sell digital tokens via an initial coin offering (ICO) to raise $500 million and bring blockchain to the gambling enclave. The ICO, scheduled for October 27, will have junket operators offer credit on behalf of the casino operators, and the money raised will help fund the construction of 1,600-square-meter floating Dragon Pearl Casino Hotel.

ICOs have already caught the eye of regulators in China who are concerned with possible cases of fraudulent fundraising and speculative investment, but Dragon Corp’s digital token sale is expected to face even closer scrutiny after reports surfaced that the Macau gaming company’s ICO has the backing of 61-year-old Wan, also known as Broken Tooth. Wan was released from prison in December 2012 after serving a 14-year sentence for illegal gambling, loansharking and criminal association.

On Tuesday, the South China Morning Post published photographs that showed Wan at a signing ceremony between Dragon Corp. and Thailand-based Wi Holding. A source familiar with junket financing told SCMP’s Niall Fraser that while an ICO “is probably more secure” compared to the “traditional handshake or one-page agreement,” it is doubtful that the token sale will escape the authorities’ wrath since junket operators “are essentially trying to use an IT patch to legitimize an underground activity.”

Under Dragon Corp’s ICO, investors will basically become “a shareholder in a junket, utilizing blockchain technology, getting revenues from that, and plugging that back into the token,” according to Wi Holding CEO Chakrit Ahmad. The tokens will be listed in multiple exchanges, so that investors will be able to “cash out” their funds via major digital currency exchange worldwide or Wi Holdings’ own exchange. The company also plans to develop a “social wallet” that will operate much like a debit card, allowing players to withdraw fiat currency from an ATM.

This year, ICOs have raised at least $400 million in China alone, prompting Beijing authorities to crack down on cryptocurrencies due to possible incidents of fraudulent fundraising, speculative investment or capital flight. Several weeks ago, the People’s Bank of China banned fundraising activities that use ICOs, ordering companies that have already raised money via token sales to refund their investors. The Chinese central bank also ordered cryptocurrency exchanges in the country to halt trading services for the domestic market.

Dragon doesn’t expect its ICO to be affected by the Beijing crackdown because its digital tokens are going to be issued in Hong Kong, which characterizes ICO-issued digital tokens as “virtual commodity” that are not subject to regulation, although tokens that offer buyers an equity stake fall under “shares,” and are thus subject to the Hong Kong Securities and Futures Commission’s rules.