Premier League Week 4 action ends with an in depth look at Huddersfield’s visit to the capital to face West Ham and the first managerial casualty of the season.

Last night, Slaven Bilic celebrated his 49th birthday with a victory over Huddersfield. West Ham Chairmen David Sullivan and David Gold allowed him to keep his job as a birthday gift. 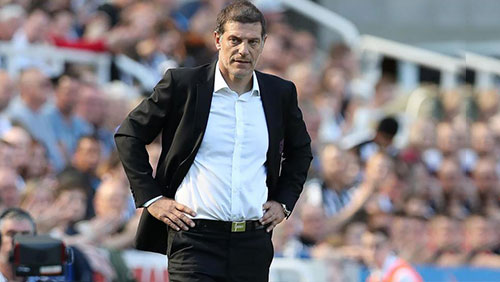 The Terriers visit to the London Stadium was terra incognita, but it didn’t show. The former Championship side controlled the football for the majority of the 90-minutes as West Ham continued to look nothing like the Champions League chasing side of two-years ago.

Both these sides are going to need huge slices of luck this season. West Ham, if they are going to get out of their current mess, and Huddersfield, if they are going to avoid relegation, and it was the Hammers turn to find it in the 72nd minute after Pedro Obiang’s speculative shot struck Mathias Jorgensen and looped over the skull of Jonas Lossl.

It was the first goal that any West Ham player, other than Javier Hernandez, had scored this season, and it came within minutes of Bilic replacing his little Mexican with Andre Ayew, a switch than saw boos raining down from the stand.

Bilic gets paid to coach a football team.

West Ham fans get paid for dishing out fish & chips, plumbing, or whatever else they do to earn a crust.

Ayew put West Ham out of sight barely five minutes after the rather tetchy welcome from the fans after poking home from close range after Jose Fonte saw his shot blocked from a West Ham corner.

Things could have been different had Thomas Ince’s shot flew a few inches below the crossbar with ten minutes remaining, but despite West Ham’s struggles, it was a win that the world expected.

Huddersfield fall as the last Premier League side to concede a goal in the 2017/18 season. West Ham and England keeper, Joe Hart, experienced his first clean sheet in 23 matches.

You need to pick a better defense, son.

The Dutchman was an excellent player, but after receiving a boot up his ass after only 14 games in charge of Inter Milan, and five games in charge of the London club, maybe it’s time for him to take up a role as a window cleaner in a sanitarium. West Ham’s win means Palace are rooted to the foot of the table; winless in four games, and news reports suggest that Palace’s owners were searching for a replacement after the first two weeks.

Who appoints the appointees?

There is surely some cloth that can be cut in the department.

The sacking, which came after 162 days, is the swiftest in Premier League history. Former England coach Roy Hodgson is expected to take up the reins.