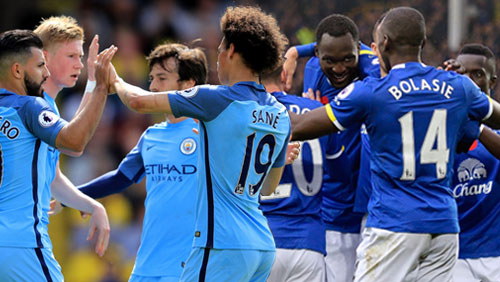 The second week of Premier League action ended with a 1-1 draw between Man City and Everton, and a moment of history for Wayne Rooney.

I am fascinated to see how Everton fair against the big boys, this season. Ronald Koeman shelled out £140m this summer, and with that comes a certain amount of pressure that was missing when Everton was a mediocre middle of the table team.

We didn’t have to wait long.

Everton travelled to the Etihad to face the Premier League favourites Man City in their second game of the season. City themselves had invested heavily in the transfer market during the summer, hacking away at the average age of the club with a £215m injection of young blood.

Everton came to frustrate and foil, and the game plan was working to perfection when Dominic Calvin-Lewin squared the ball for Wayne Rooney to score his second goal in consecutive games for his old-new club.

And Rooney didn’t cost them a penny.

The former Manchester United and England captain’s shot fell at the legs of City’s new £35m keeper, but Ederson failed to react quickly enough, and the ball squirmed through and into the back of the net.

Rooney’s landmark goal came in the 35th minute, and ten-minutes later Charlie Chaplin’s walking stick swung heavily in Everton’s favour when referee Bobby Madley had a little mental moment, sending Kyle Walker off for a second bookable offence. The second card came out after Walker backed into Calvin-Lewin in an innocuous clash.

Pep Guardiola was furious at half time, sarcastically clapping Madley, as he trudged off the pitch.

So City was up against it in the second half, but with Everton having something to hold onto, it was always going to be a game of defence against attack.

Raheem Sterling blazed over the bar after some intricate one touch passing from Kevin de Bruyne and Sergio Aguero, and Danilo saw a wicked shot pushed wide by the impressive Jordan Pickford.

Then with eight minutes remaining of normal time, Danilo sent the ball into the jukebox, an under pressure Mason Holgate headed weakly to the edge of the area, and Sterling volleyed it into the back of the Everton goal.

City continued to apply the pressure, aided by another Madley howler when he sent Morgan Schneiderlin off after a perfectly good tackle, and a spot of Hollywood from Aguero, but Everton held on for a superb point.

And if you want to be a big boy then you have to sustain the fight on two fronts. Everton travels to Croatia on Thursday to face Hajduk Split in the Europa League, where Ronald Koeman will put his £140m investment to good use. City has no such problems. The Blues travel to under-fire Bournemouth on Saturday.