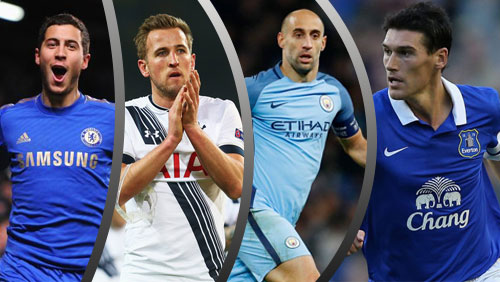 A look ahead at Week 2 of the Premier League with the picks of the bunch being the champions travelling to Wembley to face Spurs, and Everton making the short trip to Manchester to face the Man City.

Swansea manager Paul Clement has £45m burning a hole in his pocket, after the recent sale of Gylfi Sigurdsson to Everton in a club record deal, so he will be sanguine of Swansea’s hopes of avoiding a repeat of last year’s dalliance with death.

But he won’t get to spend that money before Man Utd come to town. The Red Devils arrive off the back of a sterling start that saw them hammer the Hammers by four goals to nil. Swansea began their new season with a goalless draw against Southampton.

The Swans have been a bogey side for United of late, winning three of their last six matches, including twice at the Liberty Stadium. But United are unbeaten in their last three confrontations, and with Fernando Llorente still out with a broken arm, and the man responsible for 21 of their 2016/17 Premier League goals lining up for the Toffee men, there is only one winner, here.

Two seasons ago, these two teams finished sixth and seventh respectively. Southampton continued that momentum with an eighth place finish last time out, but West Ham played football out of the Stone Age at times.

Who will turn up this year?

If the Saints are going to have another cracking run, they are going to have to do it with their fourth new manager in as many years after Mauricio Pellegrino replaced Claude Puel in the summer. On the plus side, Virgil van Dijk remains at the club despite interest from the big boys, although he will miss the West Ham match through injury.

West Ham arrives at St Marys rooted to the foot of the table after a 4-0 thrashing at Old Trafford on opening night. They will also be without key players Manual Lanzini, Cheick Kouyate and Andy Carroll. Four of the last seven games have been draws on this ground, and I believe we will watch draw number five on the weekend.

Let’s play the percentages with this one.

Watford has only beaten Bournemouth twice in all competitions since 1977.  Bournemouth, who lost their opening game against WBA, know that Man City and Arsenal are lying in wait just beyond the horizon of the Hornets. Failure to pick up three points in this one could result in a catastrophic start for Eddie Howe and his side.

Watford began brightly with a 3-3 draw at home to Liverpool, but they are a team in transition closely resembling a World XI like none other.

Jermaine Defoe will start for Bournemouth.

If anyone can go to Anfield and pick up three points, it’s Crystal Palace. Frank de Boer’s side has won their last three Anfield outings, and seven of their last 14 games in all competitions home or away.

If Palace is going to win again, they will have to do it without the talismanic Wilfried Zaha who has been ruled out with injury for at least a month.

Palace shockingly lost the opener, losing 3-0 to Huddersfield, and that defeat will still ring in the lugholes for a few weeks yet, giving Liverpool enough time to steady the ship, and beat Crystal Palace with or without supposed Barcelona bound Philipp Coutinho.

Brighton owner, Tony Bloom, made his millions betting on the outcome of football matches, but something tells me, that if he could, he wouldn’t be betting too much on his beloved Brighton this year. It’s hard to see where the Seagulls will pick up points, and The King Power Stadium is not one of them.

Leicester have looked back to their best since Craig Shakespeare took over from Claudio Ranieri last season, and with Jamie Vardy back to form, banging in a brace against Arsenal, last week, I fully expect the Foxes to eat the Seagulls alive.

2002 was the last time the Baggies won at Turfmoor. Burnley turned it into a fortress last season, ending with the ninth best home form in league with ten wins, three draws, and only six defeats. However, Burnley has not won in their last four matches, losing two by four goals to nil, drawing the other two 2-2.

Both sides began with opening day victories, but Burnley’s 3-2 win at the home of the champions, coupled with home advantage, will, I believe, give them the edge over West Brom in this one.

Newcastle beat Huddersfield 3-1 at the Kirklees Stadium last season but lost 2-1 at home. Huddersfield finished 13 points behind Newcastle in the English Football League (EFL) Championship but began life in the Premier League by spanking Crystal Palace 3-0, while Newcastle suffered a home defeat to Spurs.

There’s no disgrace in losing to Spurs, but it is a disgrace for your captain to receive a red card for stamping on another player. Jonjo Shelvey misses the Huddersfield match, and as I can’t think of another reason to pick a winner, that will do for me.

Spurs fans will be hoping that idiots like me won’t be banging on about their poor Wembley form, as they move into the home of English Football like a hermit crab.

Spurs have lost seven of their last eleven games at Wembley, including a 4-2 defeat against Chelsea in the FA Cup Semi Final last year. And Spurs don’t tend to do very well in London derbies, only winning twice against Chelsea in 17 games stretching back to 2010.

On the positive side for Mauricio Pochettino’s side, one of those wins was a 2-0 victory when all the jewels were on the line last season, and Chelsea head into the game low on confidence after their humbling at home to Burnley.

Spurs are yet to make a summer signing, meaning squad solidity, and so I expect them to take three points in this one, sending a signal to the rest of the league that they can and will beat the best on the hallowed turf.

I believe this tie is one of the most exciting fixtures of the weekend, but the bookies don’t agree with me. Despite Ronald Koeman using his Romelu Lukaku money to strengthen all areas of his squad, the bookies have Man City as a huge favourite to win this tie.

One of the reasons for the lopsided odds is City has only lost twice in the last ten meetings between the two clubs, and you have to go back seven years to read about an Everton win at City.

It’s going to be a fascinating encounter, especially with Wayne Rooney chomping at the bit to put one over his old rivals, but I can’t split them and am going to go with a high scoring draw.