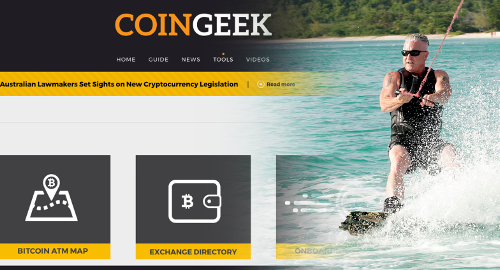 CalvinAyre.com was set up to address fake news in the gaming industry and CoinGeek.com’s clear intent to do the same in the Bitcoin world has impressed both Calvin himself and the team behind CalvinAyre.com. With the established financial system putting its might behind derailing Bitcoin, alarmist and inaccurate media in the space is, sadly, rife.

The plan is for CalvinAyre.com to continue to cover Bitcoin news as it relates to the gaming industry, while using its considerable resources to enable Coingeek.com to hire more technical and media personnel, thereby allowing the site to provide truly global coverage of this rapidly expanding economic instrument.

Many governments are looking into Bitcoin, with economic heavyweight Japan taking the step to officially recognise the cryptocurrency. Antigua & Barbuda are also looking to take a lead in Bitcoin-related commerce, having recently named Calvin Ayre as their specific economic envoy for Bitcoin and blockchain technology.”

Mr Ayre is personally putting his time, effort and financial resources into projects that expand Bitcoin’s reach and acceptance. Ayre maintains that massive on-chain scaling is needed for Bitcoin transaction fees to become small enough to enable micro-transactions, and Ayre believes the Bitcoin Cash blockchain will become the one ‘chain that powers the world, a view shared by the Government of Antigua & Barbuda.​