17 August 2017 – Shanghai, China:The largest sports media property in Asian history, ONE Championship™ (ONE), has just announced its inaugural event in Shanghai, China, which is set to take place on 2 September, at the Shanghai Oriental Sports Center. The bustling metropolis will play host to ONE CHAMPIONSHIP: SHANGHAI, featuring the absolute best in local and international martial arts talent. In the main event, ONE Welterweight World Champion Ben Askren of the United States returns to the ONE Championship cage to defend his title against challenger Zebaztian Kadestam of Sweden. 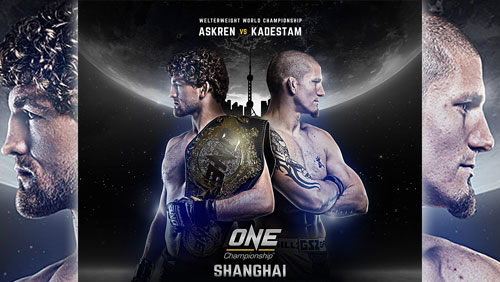 Ticket information for ONE CHAMPIONSHIP: SHANGHAI is available at www.onefc.com

Chatri Sityodtong, Chairman and CEO of ONE Championship, stated: “China is one of our biggest markets, and the focus has been to really bring the rich cultural history of martial arts in China to the forefront. It is a delight to finally announce our inaugural event in the beautiful city of Shanghai. We are coming at you live and ready to showcase the world’s most authentic display of martial arts. With an exhilarating main event prepared for our fans in Shanghai, Ben Askren is ready to defend his ONE Welterweight World Championship against Swedish challenger Zebaztian Kadestam. The interesting clash of styles should provide fans a solid matchup. Moreover, we have an amazing card planned for fans all across the world. This is a live event you would not want to miss!”

Apart from the announcement of ONE CHAMPIONSHIP: SHANGHAI and its highly-anticipated headlining bout, ONE Championship has also ventured into partnerships with Didi Chuxing, I-Fitness, and the Tourism Authority of Thailand (TAT).

Didi Chuxing is the world’s largest comprehensive one-stop mobile transportation platform which offers a full range of mobile tech-based mobility options for over 300 million users across 400 Chinese cities. Meanwhile, I-Fitness leads in fitness curriculum operations research and development in China, which is devoted to building the best fitness market operation upgrade platform in the country with more than ten independent research and development courses.

Furthermore, TAT is the first organization in Thailand to be specifically responsible for the promotion of tourism. TAT supplies information and data on tourist areas to the public, publicizes Thailand with the intention of encouraging both Thai and international tourists to travel in and around Thailand, conducts studies to set development plans for tourist destinations, and cooperates with and supports the production and development of personnel in the field of tourism.

Sityodtong added: “I am thrilled to announce this partnership with Didi Chuxing, I-Fitness, and TAT as our partnership signifies another incredible moment for martial arts in Asia and ONE Championship. As a lead up to the biggest martial arts event in Shanghai, China on 2 September, ONE Championship will roll out a massive campaign across all media platforms throughout the country.”

A former NCAA Division I All-American, Ben “Funky” Askren of the United States is a collegiate wrestling legend and a US Olympian who represented the nation at the 2008 Summer Olympics in Beijing. He is universally recognized as one of the finest martial artists in the world today. Askren joined ONE Championship in 2014, winning the ONE Welterweight World Championship in just his second bout. Askren has since successfully defended the title twice, including his most recent victory, a first-round submission of young Malaysian star Agilan Thani in May. Sporting an unblemished 16-0 professional record, Askren seeks to continue his reign as champion, this time against Zebaztian Kadestam.

Zebaztian “The Bandit” Kadestam of Sweden holds an outstanding professional record of 9-3, and is a tremendous competitor with a wide array of striking and grappling techniques. Seven of his nine career victories have come by way of knockout. Kadestam made a successful ONE Championship debut last May when he defeated Luis Santos, upsetting the top welterweight contender via a come-from-behind third-round knockout. Kadestam’s resounding victory quickly earned him a title opportunity, as he is now booked to face the toughest opponent of his career in Ben Askren.

41-year-old Narantungalag Jadambaa of Ulaangom, Mongolia, is one of the top talents in ONE Championship’s deep featherweight division. At 12 wins and five losses, Jadambaa has faced the biggest names in Asian martial arts and has posted wins over notable ONE Championship stars Kotetsu Boku and Eric Kelly. Featuring incredible strength, durability and skill, Jadambaa is recognized among the very best in the world, having been the former ONE Featherweight World Champion. In his most recent bout, Jadambaa fell just short of victory in an epic rematch with reigning champion Marat Gafurov. Next, he faces Japanese grappler Tetsuya Yamada.

27-year-old Tetsuya Yamada of Kanigawa, Japan, is a promising young martial artist with a distinct ability to seek out highlight-reel stoppages. He made his ONE Championship debut in January of 2016 in an extremely high-level wrestling showdown against Eduard Folayang of the Philippines. A seasoned grappler, 14 of Yamada’s 18 career victories have come by spectacular finish, including six submissions. After a brief stint in other promotions, Yamada returns to the ONE Championship cage to take on former ONE Featherweight World Champion Narantungalag Jadambaa.

Chinese bantamweight contender Miao Li Tao is set to make his ONE Championship promotional debut against 23-year-old Liu De Li Ri Ge Hu. The two competitors are set to do battle at ONE CHAMPIONSHIP SHANGHAI in front of a packed stadium filled to the rafters with their hometown fans. Miao, who represents the Fighting Brothers Gym in Beijing, is a Sanda and boxing practitioner while Liu De Li, who represents Long Yun MMA in Harbin, specializes in Mongolian wrestling.

Beijing-based former professional boxer Xu Chun Yan is set to make her ONE Championship debut, and will take on 19-year-old Cambodian Eh Ya Nut in a showdown of talented young strikers. Eh Ya Nut possesses valuable experience inside the ONE Championship cage, having competed in the promotion in December of 2015. Xu, a former WBC Intercontinental champion, will test her skills against the Khun Khmer specialist in an exciting striking battle.

Making their highly-anticipated ONE Championship debut, “The Sweeping Monk” Chen Geng Min will take on opponent Peng Xue Wen of Guangdong in a three-round strawweight contest. Chen, a multiple time Brazilian jiu-jitsu champion, is 3-0 in professional martial arts competition, and is a mainstay of AMA Gym in Shanghai. Peng, on the other hand, sports a 2-1 professional martial arts record and is the former 2014 National Youth Greco Roman Wrestling Champion. The two warriors are set for what is expected to be a high-level grappling affair.

30-year-old Sagetdao Petpayathai is a Muay Thai specialist and a four-time Lumpinee Stadium champion who has won every major title in Muay Thai. He made his professional cage debut last March at home in Bangkok, defeating Malaysia’s Kelvin Ong via first-round technical knockout. Voted by Thai media as one of the greatest Muay Thai practitioners in history, Petpayathai is known for his highly technical knowledge in all of Muay Thai’s varied techniques. Petpayathai will be taking on Mahmoud Mohamed in his second bout inside the ONE Championship cage.

Mahmoud Mohamed of Cairo, Egypt, is a ONE Championship lightweight competitor with a 4-4-1 professional martial arts record. He made his promotional debut in January of 2016, showcasing well-rounded striking and grappling skills against talented young opponent Christian Lee. In his most recent bout, Mohamed took on former lightweight contender Bashir Ahmad. He now returns to action seeking victory, but will have to go through Sagetdao Petpayathai to claim success.

30-year-old “Supermom” Miao Jie of Shanghai, China is a professional martial artist with a 2-1 record. A talented grappler, Miao recently placed third overall as a purple belt at the 2017 IBJJF World Championships in Long Beach, California, USA. Looking to make a name for herself in Asia’s premier martial arts organization, Miao seeks to showcase her complete skills as she makes her ONE Championship debut against Mona Samir.

Female flyweight competitor Mona Samir of Cairo, Egypt, is a professional martial artist with a 1-3 record. Samir made her ONE Championship debut in September of 2015 against Singapore’s Angela Lee, and returned to the promotion a year later to face Michelle Nicolini. Featuring a well-rounded set of skills, Samir is determined to claim victory inside the ONE Championship cage. Having faced the biggest names in women’s martial arts in Asia, Samir is ready to utilize her experience as an advantage against opponent Miao Jie.

22-year-old Singaporean lightweight prospect Amir Khan is a professional martial artist with a stellar 7-2 record. He is considered one of the most promising young talents to represent Singapore on the international stage of martial arts. Khan is currently riding a four-bout win streak, which includes one win by submission and three by devastating knockout. In his most recent outing, Khan needed just a little over a minute to finish Rajinder Singh Meena with punches. Next in line for Khan is the dangerous Jaroslav Jartim.

Prague-based martial arts star Jaroslav Jartim of Czech Republic will return to the ONE Championship cage following an unsuccessful debut last April at the hands of Honorio Banario. With a professional record of eight wins, six losses and one draw, Jartim remains a highly-capable competitor with tremendous finishing ability. Of his eight victories, three have come by submission and three by knockout. The Penta Gym Prague representative is set to face top Singaporean lightweight prospect Amir Khan.

Shanghai-based competitors “The Ghost” Zhang Ze Hao and former boxer Li Cheng Chao are set for their first appearance inside the ONE Championship cage. Zhang, a proponent at the AMA Shanghai Gym, is 2-2 as a professional and sanda and Brazilian jiu-jitsu practitioner. Li, representing the Dragon Warrior Gym, is also 2-2 as a professional, and comes from a boxing background. The two are set for a three-round battle on the preliminary card of ONE CHAMPIONSHIP: SHANGHAI.

Kicking off the action at ONE CHAMPIONSHIP: SHANGHAI are two promising young bantamweight prospects. Malaysian warrior Marc Marcellinus is set to return to the ONE Championship cage opposite Vietnam’s Tran Quang Loc. Marcellinus has already competed twice for the promotion, taking on Singapore’s Stephen Langdown in 2013 and Thailand’s Anatpong Bunrad in 2014. After a long break from professional competition, Marcellinus returns to face Tran, an exciting prospect from Ho Chi Minh City who is making his professional martial arts debut.

ONE Championship is the largest sports media property in Asian history. Headquartered in Singapore, the world’s most exciting mixed martial arts organization hosts the largest sports entertainment events across Asia featuring the best Asian mixed martial artists and world champions, all signed to exclusive contracts, on the largest media broadcast in Asia. ONE Championship is broadcast to over 1 billion viewers across 128+ countries around the world with some of the largest global broadcasters, including FOX Sports, MNC, Astro, Thairath TV, ABS-CBN, Claro, Bandsports, HTV, Mediacorp, Premier Sports, OSN and more.