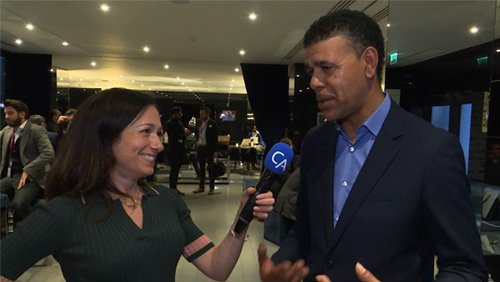 In this interview with CalvinAyre.com’s Becky Liggero, television presenter and football analyst Chris Kamara talks about the seriousness of sports and the ban on players betting on sports betting.

From sports betting advertisements to football game matches, beloved funny man Chris “Kammy” Kamara is surely next to God when it comes to being omnipresent.

When he is not giving his comic yet insightful football analysis as sports presenter for Sky Sports and ITV, you can see Kamara playing the role of a sexy waitress, a construction worker and an office worker in different advertisements for bookmakers.

Kamara is also currently on a bizarre road-trip with Soccer Saturday presenter Jeff Stelling as they take a crash course in all things GAA before commentating live on the 2017 All-Ireland final.

The respected football analyst say the key to becoming a successful sports presenter doesn’t exactly rely on striking a balance between seriousness and comedy. He pointed out that presenters should always remember that people want to be entertained.

“I know when people want to watch football, they want to be entertained. It’s not a case of trying to balance it, I just do what I do. Thankfully, it comes out that way. There’s a lot of people that are too serious in this world, so I try to give them a little bit of laughter,” Kamara told CalvinAyre.com.

Just like everybody else, Kamara said that his career as a presenter started in a betting shop where he used to do the audio when tipping on football on who’d win and who’d lose.

His brand of comedy has soon brought him to the advertising world, where he did commercials for over 12 years.

“The first one we ever did was inside the café. We were all working as builders in the café. And that was fun, really, really fun. I’ve got on to do with the other one, an Italian from Milan. Yes it was from Milan. They were fun. The shower scene is a great one to do. My wife was a bit disappointed because I don’t have any clothes on. When they sent the stills,” he recalled. “And we’ve gone to the latest advert. Everybody loves it, which is absolutely very brilliant. I played eleven different characters in it and even a dog. That’s been great ones, and the feedback from everybody has been wonderful.”

Weighing in on the issue of players betting on sports betting, Chris Kamara said that players must know when to act silly and when it is time to buckled down to business.

He cited the case of football star Joey Barton, who bet against his own team when he wasn’t playing. Barton’s actions led him to be banned from the sport.

“The situation is, all players know that they’re not allowed to gamble. Whether it be on their team or anybody else’s team. The rules are set out plainly to begin with. So you expect, if you get caught, you get a fine or you’ll be told to not do it again,” Kamara explained. “Joey Barton is being silly, he bets against his own team when he’s not playing. He is not trying to fix the game, nobody is accusing him of that. What they are saying is they are betting on football matches for a long, long time and they come up with the ban. I think the ban is harsh.”

Kamara said football players should learn from Barton’s mistake or else face the same consequence.

“But there’s no way back for Joey now, so slightly disappointed. I think what they’ve done is they’ve sent out a message by using Joey to everybody else to say, no gambling whatsoever. If you do it, you’ll suffer the same punishment and there’s no going back on that now,” he said.