Devilfish honoured by Poker Hall of Fame, two-years too late

The Poker Hall of Fame has honoured the late Dave ‘Devilfish’ Ulliot by enshrining him as a member, but hasn’t it come two-years too late?

The first poker player that entered my memory palace was Dave ‘Devilfish’ Ulliot.

I was tripping when someone turned the TV to Channel 4, and there he was playing poker. I thought he was a vampire, and then he was a vampire. Flying out of the tube, grabbing me by the throat, and sinking his teeth into my neck.

When I first met him, the vampiric memory wasn’t the reason I needed a change of underwear. My fear was born from meeting a legend. From the ‘Devilfish’ knuckle dusters to his suit, and all the imagery that had passed my field of vision for many years – I was in awe.

And I wasn’t alone. 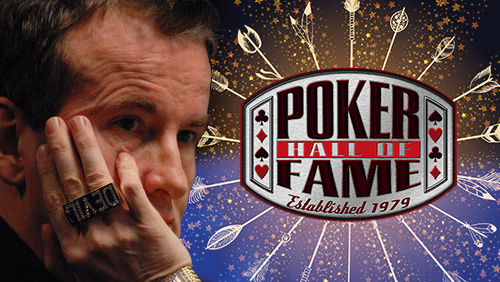 Talk to anybody of my age in the UK who is interested in the game of poker, and plenty of them will tell you that Devilfish was the reason they asked Santa Claus for a chip set.

For nearly two decades, Devilfish won more money playing live tournaments than anyone else in the UK.

In 1999, the man from Hull won the inaugural Late Night Poker, a show that brought poker to the mainstream in Europe for the first time, becoming the first true televised star of poker.

Dave “Devilfish” Ulliot and Phil Ivey, met, heads-up, in that 2003 WPT Main Event in Tunica, and the Poker Hall of Fame nomination process has just announced the pair as the Class of 2017.

Like Daniel Negreanu in 2014, Ivey was a shoe-in, having turned 40-years of age, and being widely considered as one of the greatest poker players of all time, but Devilfish had to work a little harder for his slot.

When Devilfish passed away, the UK poker community, supported by Ulliot’s friends and fans throughout the world, pushed heavily on social media for his inclusion in the 2015 Poker Hall of Fame.

It would have been a beautiful moment for those that loved and respected him to gather in unity and celebrate his achievements in the game, at a time when there was so much pain and loss for those that he left behind.

But it didn’t happen.

The living members of the Poker Hall of Fame, and the Blue Ribbon media panel chose Jennifer Harman, and John Juanda.

The following year, the Devilfish fan club were still pushing, but by this time, the celebratory feel had been contaminated by feelings of xenophobia, and an anti anything American vibe, and by the time those with the keys to the kingdom anointed Todd Brunson and Carlos Mortensen, people had begun to believe Devilfish was going to become another Thor Hansen.

Two years after his death, those who loved him as a husband, father, friend, or what he did for the poker industry, can finally pay homage.

Why did we have to wait two years?

Whatever Happened to Sensibility And Sentimentality?

I was going to write: I would love to be a fly on the wall when the Poker Hall of Fame and media select the next dynamic duo, and then it suddenly struck me where the problem lies within this imperfect system.

The 40+ people don’t meet. There is no opportunity for someone to grab the gavel, and slam it down onto the table to demand ‘order,’ or to stand up and say to everyone, let’s be a little sensible here.

Jennifer Harman, John Juanda, Todd Brunson, and Carlos Mortensen, are mere pups within the poker industry. Whether or not they are deserving of their position in the Poker Hall of Fame doesn’t concern me. What does concern me is the timing of their inclusion.

The Devilfish Hall of Fame debate is a polarised one. His death means there is nothing more he can do to persuade people that he belongs in the club. His previous contributions mean he was Poker Hall of Fame worthy, or he wasn’t.

Given the stringent rules surrounding the nomination process, and that Ulliot made the shortlist for the third consecutive time, we can safely assume that the feeling of those that mattered was that Devilfish would have one day entered the Poker Hall of Fame.

So why wait for two-years?

Why couldn’t Harman, Juanda, Brunson, and Mortensen have held the door open for his family to walk through and honour the man, in the months after his passing, when his death was the purest and raw? Do you think any of those wonderful men and women would have cared, that their accomplishments were celebrated in 2015 & 2016 as opposed to 2016 & 2017?

I am raising these points, not because I believe Devilfish is a perfect paragon of purity who deserved a place in the Poker Hall of Fame – I don’t buy into this Devilfish the great man song – but because I don’t want to see this happen again.

In 2012, Thor Hansen was diagnosed with terminal cancer. Later that year, the Norwegian star made the shortlist for Poker Hall of Fame only to be passed over in place of Eric Drache and the late Bryan Roberts. In 2013, Hansen once again made the cut and was once again overlooked, as the nomination panel went for Tom McEvoy and Scotty Nguyen.

Are we going to wait until Hansen loses his fight with cancer, and then provide his family, fans, and the poker community with a posthumous platform to celebrate his life’s work?

Or is Hansen never going to get into the Poker Hall of Fame because, like me, he doesn’t meet the criteria?

I would argue that Hansen will one day become enshrined into the Poker Hall of Fame, and his legacy will be secured, but I fear the panel missed their opportunity in 2012 & 2013, and it may not arise again in such a perfect way.

I mean, come on, what is the purpose of a Poker Hall of Fame anyway? Is it so poker players can send their grandchildren a link to the Wikipedia page so they can see what bastions of the sport they were? Or is it, like I believe, a once in a lifetime opportunity for everyone to salute the sacrifice one makes in this game. To allow the greats to spend one moment in the spotlight; just them, and to feel like it was all worth it.

To the 27 living Poker Hall of Fame members, I have a question:

Cast your mind back to a time when you were no more than a prospective Poker Hall of Fame candidate. How would you have liked your decades of sacrifice enshrined into poker immortality?

During a ceremony, with the smell of cards and chips articulate in the air, surrounded by family, close friends, and feared competitors – reading the outpouring support of thousands of your fans on social media from New Zealand to Timbuktu?

Or after you were dead?