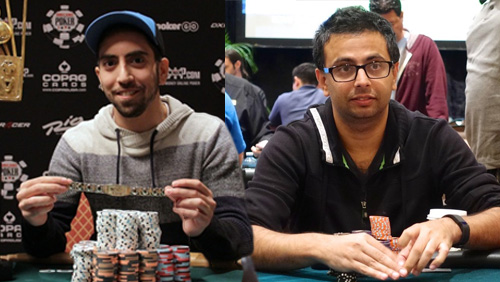 A World Series of Poker round-up of contrasting competitions as Elior Sion wins the $50,000 Poker Player’s Championship, and Nipun Java becomes the second player to win two bracelets this summer after victory in the $1k online event.

The 48th World Series of Poker (WSOP) has seen members of the cash game coalition shine, and the $50,000 Poker Player’s Championship was no exception.

Heading into the final table, only one person was gossiping about Sion, and that was Daniel Negreanu. The six-time WSOP bracelet winner, came into the final with the chip lead, and more confidence than OJ Simpson taking a polygraph, but he had respect for the young 26-year-old from the UK telling PokerNews he was the man he feared the most.

The feelings were reciprocal, as Sion would later admit, that his biggest concern was the most famous poker player of them all. Fortunately, for Sion, Negreanu wouldn’t prove to be too much trouble, as a devasting run of cards led to a disappointing fifth place exit.

It was an incredible performance by Sion, who was down to a single big blind on Day 3 before rallying back to take every chip in the game. Sion’s heads-up opponent, Johannes Becker, was a familiar one for the Brit – the two have clashed online – and it was the German who began with a 3:1 chip lead after sending Isaac Haxton to the rail in third, with the vast majority of the American’s chips heading to Becker after aAA>KK cooler in No-Limit Hold’em.

The heads-up battle saw the chip lead change hands six times, until Sion took the lead in a hand of Stud Hi-Lo, and went on a mini heater taking pots in 2-7 Triple Draw, No-Limit Hold’em, and Omaha Hi-Lo to take the prestigious trophy.

Sion’s victory means the UK has pulled away from Russia as the most successful nation, when it comes to bracelets won in this series behind the USA, with five.

Sion wasn’t the only British player to cash in this event. The 2013 champ Matthew Ashton (8th), and philanthropist, Talal Shakerchi (13th) also made the cut.

From one of the most prestigious WSOP bracelets of the summer to one of the least, and Nipun “Javatinii” Java has won Event #71: $1,000 WSOP.com Online No-Limit Hold’em.

Before the 48th WSOP had kicked off, nobody from India had ever won a WSOP bracelet, and now they have three. Java and his good friend Aditya Sushant also won the $1,000 Tag Team event, making Java only the second player, behind David Bach, to win two bracelets this year.

Java outlasted 951 entrants, a whopping 24%drop in interest to the 1,247 that took part last year. The two stand out names that made the final table were Evan “YUDUUUUUUUUU” Jarvis (4th), and Vinny “Mr_Sinister” Pahuja (5th). But it was Java who added the $237,688 to the $75,318 he won in that tag team event to cap off a fine series with the Main Event looming.