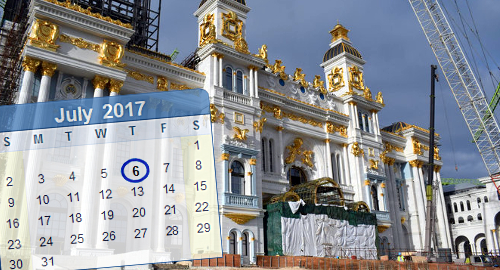 Last week, gaming regulators in the Commonwealth of the Northern Marianas Islands gave their approval for IPI to launch gaming operations at its unfinished Imperial Pacific Resort Saipan by July 15. On Monday, IPI announced that it aims to launch gaming at the new venue by July 6.

Since July 2015, IPI has been running a ‘temporary training facility’ called Best Sunshine Live out of a high-end shopping mall in Garapan. But as of 5pm on July 6, IPI will officially transfer its gaming operations to the new permanent venue, and gaming activity at Best Sunshine will cease.

IPI CEO Kwong Yiu Ling said the company was “very excited” to be launching “a new era of luxury on Saipan” by transferring its gaming operations to the new venue. The new gaming floor will make its debut with “over 70” gaming tables and “over 190” electronic gaming machines.

What it won’t feature is hotel rooms, as construction continues on the property’s first phase hotel. In April, local regulators authorized a one-year extension of the deadline for completing the resort’s first phase, which must now be ready to launch by August 31, 2018.

The permanent gaming venue’s big coming out party could be spoiled by the presence of protests by construction workers who have yet to be paid by IPI subcontractor Gold Mantis. The Marianas Variety reported that 30 foreign workers gathered outside the resort on Monday to protest having “worked long hours to build the casino facility under dangerous conditions for little compensation or, worse, no pay at all” before being laid off in April.

Given that the calendar just ticked over to July, IPI would normally be releasing Best Sunshine’s VIP gambling turnover numbers for the month of June. But IPI announced last month that henceforth it would be releasing details on turnover “only when it is less than $2.5b.” Given that no announcement was made, we can only assume that Best Sunshine closed out its final full month of gaming on a high note.