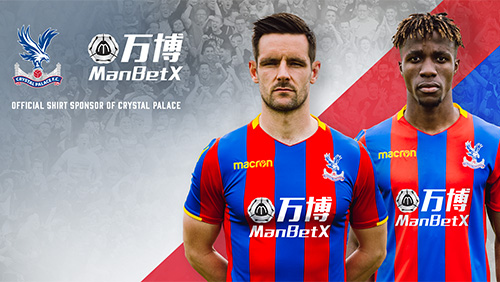 The partnership, believed to be the 8th biggest club deal by value in the Premier League, will see ManBetX’s logo featured across the Club’s shirt at all competitive home and away games, pitch side LED and other branding at Selhurst Park as well as across online and social media channels in the UK and internationally.

ManBetX are an international gaming company who provide customers with sports betting and casino products. The partnership will enable Crystal Palace to engage with a wider global audience and grow their international fan base while giving ManBetX exposure in the most watched league in the world.

The betting brand join at an exciting time for the Club as The Eagles embark on their tour to Asia, starting with the Premier League Asia Trophy in which they play Liverpool on July 19th in Hong Kong.

On his appointment and of the new partnership, Crystal Palace manager Frank de Boer said: “I am thrilled to be appointed as manager of Crystal Palace Football Club. It is a great honour to take charge of such an historic club, a club that is known around the world for its hugely proud and passionate fan base. This role is a hugely exciting opportunity for me, and I cannot wait to get started in the Premier League with the players and staff here in South London.”

Steve Parish, Chairman at Crystal Palace, said: “We are delighted to welcome ManBetX as the club’s official shirt sponsor. The continued growth of our international fan base and the attraction of Premier League makes the club an attractive partner for ManBetX, and our growing reach around the world gives ManBetX an ideal platform to continue its own brand growth.”

A ManBetX spokesman commented: “It’s a hugely exciting time to partner with a high profile Premier League team like Crystal Palace F.C. We’re certain Crystal Palace provides us with the platform to reach new heights and are looking forward to engaging with the Club’s ever growing fanbase in the UK and worldwide. We’re looking forward to the 2017/18 Premier League season.”