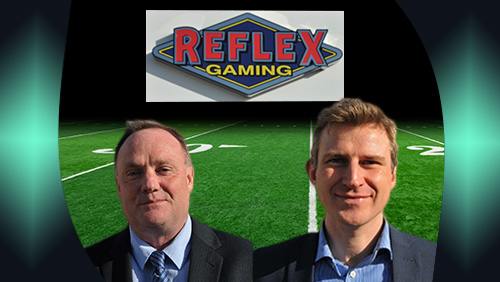 Reflex Gaming has bolstered its creative team with the appointment of Mike Salt to the post of Senior Game Producer (analogue) with Steve Kick taking up the same position but with responsibility for the company’s growing portfolio of digital content.

Reflex Managing Director, Quentin Stott, said: “Companies such as Reflex are judged across a number of criteria, but the most critical measurements relate to the creativity, consistency and performance of our gaming products. I am therefore, delighted to announce the twin appointments of Steve and Mike who add considerable experience and pedigree to the creative side of the business.

“Mike spent 16-years working for the Bell Fruit Group, where he was responsible for many design innovations which featured in a host of what are widely considered to be Bell Fruit’s most iconic games. Steve’s early career was spent at Maygay; he went on to join Inspired Gaming Group, where he was responsible for the pipeline of SWP, Digital Cat C, B3 and B2 gaming product. He also designed games for online as well as for a range of export markets, including Italy, Columbia and Norway. The appointments are a clear sign of our commitment to both sectors of the Reflex business as we prepare for the challenges and opportunities in a post triennial gaming market.”

The new team is already having a positive influence on the business with Reflex reporting a positive 2017 across the company’s product portfolio. The agreement signed with William Hill at ICE has seen Reflex get off to what Quentin Stott described as a “flying start” with its first two games performing very well. Game Master, the digital Cat C compendium launched at EAG and available in both the Black and the Diamond menus has achieved significant orders, success which has been replicated by Tornado, the company’s analogue Cat C.