Home / Press Releases / Why a Reflex is faster than a reaction 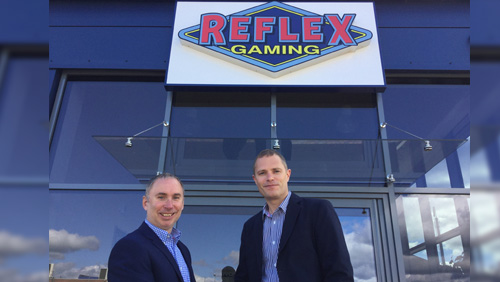 Quentin Stott, Managing Director of Reflex Gaming, explains the inroads made by the so called ‘new kids on the digital block’ on why independence equals agility.

12 months on from your official entry into the digital gaming space: what has been achieved since the launch at ICE 2016 and what lessons have been learned?
ICE 2016 was an intense learning experience for us. ICE is not so much about how much business you write but about who you meet, the conversations you have and ultimately how much you listen. I’ve seen a number of other exhibiting companies describe ICE as a listening show and whilst that might sound counter intuitive coming from a commercially driven company, it certainly sums up our outlook. Essentially, I came away from ExCeL last year knowing that we were under resourced for the task ahead. The first move was the appointment of Mat Ingram as Chief Product Officer. Mat has a fantastic track record with over a decade at Inspired Gaming Group. As importantly, he shares our outlook and philosophy. With Mat’s direction we have made some big strides and contracts have been signed with some major brands with others at

various stages of negotiation. ICE was incredibly valuable because it provided a route map of what we should do and sign posted the blind alleys and the dead ends that we should avoid.

What criteria will you use to judge the success of ICE and what are the key marketing/commercial messages you will be issuing?
We are the new kids on the digital block and I want to show how far we’ve progressed in a very short time, establish the brand, demonstrate that we are a serious player and bring Mat and the team that he is assembling to the fore. I think that we have recruited what are some of the UK’s most successful games designers and it’s important that we are able to communicate the energy and skill set that we are bringing to the task. I want to be able to meet the right people and to be able to explain our strategy moving forward in terms of the creation and supply of bespoke and generally available games. The portfolio will comprise hand crafted games designed for specific jurisdictions and demographics. We will not be producing vast collections of ‘me too’ products which actually serve little or no purpose. We are a hungry company and one which goes the extra yard in pursuit of excellence.

The independent research you conducted last year – The Social Gamers Census – generated considerable coverage in the gaming media, how have you been able to use the findings?
Whilst we are an established brand in traditional bricks and mortar gaming with, what I believe, is a strong and respected position in the market, our profile in the digital space simply doesn’t compare. We needed to have a story to tell at ICE and the findings of The Social Gamers Census was that story. It was a big piece of research that attracted over 6,000 responses from active gamers. The research enabled us to have the right conversations with the right people.

Is the industry any closer in being able to convert social gamers into RMG – or is that missing the point, in your opinion?
Players should move from one to the other only if they feel comfortable making the transition and I don’t think the issue should be forced. We are in the business of selling entertainment and different people get their gaming entertainment in different ways.

As an independently owned company operating in a largely plc environment, what challenges or obstacles have you encountered or do you see your status as being an advantage?
There’s two parts to this: firstly, it definitely helps being non-political and not being tied to a particular owner. But whilst we all live or die by the quality of games that we produce, independent companies tend to be more agile and can make decisions, often, very big decisions, quickly. Mat and I can have a conversation and be able to provide the customer with a definitive answer almost immediately. In some organisations processes can get in the way of decision making. Fundamentally, I think independent companies are hungry and prepared to push the envelope.

What objectives have you set for the business in 2017?
From a digital perspective I want to continue the conversations we had last year, establish positive relationships with the major players, grow the customer base and at the end of 2017 have a portfolio of 12 or so really strong games that we are proud to put our name to. ICE is the catalyst for this and really serves to kick-start the business year.