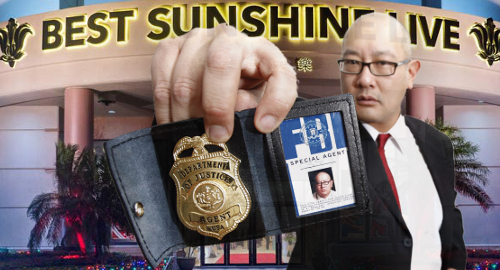 Saipan casino operator Imperial Pacific International Holdings (IPI) had its offices raided by the Federal Bureau of Investigation, and the reason for raid remains open to speculation.

The Marianas Variety reported that an FBI evidence response team executed an early morning search warrant on the Garapan office of IPI’s construction department on Thursday. The Saipan Tribune reported that four FBI agents, a US Marshall and several local police had blocked off the building’s entrances with yellow tape.

Saipan legislator Ed Propst told Bloomberg that the raid appeared to be “a joint effort between local and federal authorities.” The FBI said it was “not in a position to comment at this time” and IPI execs have been similarly mum.

Last November, US media reported that the Treasury Department’s Financial Crimes Enforcement Network (FinCEN) had opened an investigation into the staggering sums being wagered at Best Sunshine Live, IPI’s temporary Saipan casino in a high-end shopping mall. IPI has denied knowledge of any such investigation.

In February, the US Department of Justice conducted a weeklong training session to educate local gaming regulators on their anti-money laundering responsibilities. The FBI was among the agencies that participated in the sessions. Saipan is part of the Commonwealth of the Northern Mariana Islands, a US territory, which puts its financial dealings under US oversight.

SAFETY PROBE?
However, the raid could be unrelated to IPI’s gaming operations. A representative of the construction firm hired by IPI to build its permanent Saipan casino claimed the raid was related to last week’s death of a construction worker at the building site.

Earlier this week, Saipan politicians had expressed concerns regarding potential safety violations at the building site and the CNMI Department of Labor is reportedly conducting its own investigation into the incident. Last week IPI chairman Mark Brown expressed concern about reports of workers who “infringe the law.”

IPI has been frantically trying to complete its Imperial Pacific Resort Hotel Saipan by this Friday’s stated deadline. Earlier this week, IPI declared that the new casino would be “opened to the public,” although the announcement failed to indicate whether the casino would actually be operational. It’s equally unclear what effect Thursday’s raid might have on the opening.

BEST SUNSHINE SETTLES EX-VP’S LAWSUIT
In a (perhaps) curious bit of timing, Danny Ewing, the former VP of table games operation at Best Sunshine Live, has reportedly settled the wrongful termination lawsuit he brought against IPI last December. The Marianas Variety reported that a settlement conference had resulted in the warring parties reaching a deal, the details of which will be filed in court next week.

Ewing had claimed he was fired last August after refusing to go along with IPI advising VIP gamblers how to structure financial transactions to avoid US federal reporting thresholds. IPI rejected the allegations, saying it has always complied with its regulatory obligations.