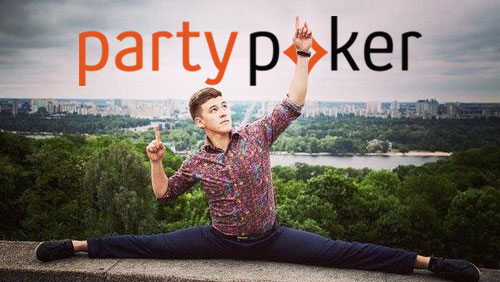 Partypoker has signed Anatoly ‘nl_profit’ Filatov as brand ambassador, and the Ukrainian Dmitry Chop took down the partypoker Million event in Sochi, Russia for $225,000.

Online poker room partypoker continue to invest in the global growth of their brand by hiring Anatoly ‘nl_profit’ Filatov as their latest brand ambassador.

Anyone paying attention to the media coverage of the new partypoker Million event in Sochi, Russia, would have noticed Filatov playing a big part in the promotion of the event. The tour was an incredible success making a return inevitable and the addition of Filatov to the team to act as a conduit to the Russian-speaking players is a sensible one. The next big poker room to land in Sochi, Russia, is the PokerStars Championships, and they also recently strengthened their Russian ambassadorial team by hiring Igor Kurganov.

Whatever @TheNotoriousMMA thinks, the real #billionaires are in Russia. Are we right @nl_profit? #partypokerLIVEpic.twitter.com/8RPkwDaKXB

According to Hendon Mob statistics, Filatov had earned close to $1.4m in live tournament earnings with his biggest score coming in March 2014, when he took €265,200 for finishing second to Fabrice Soulier in the €10,300 High Roller at Season 10 of the now-defunct European Poker Tour (EPT).

Filatov is also the Team Manager of the Global Poker League (GPL) side The Moscow Wolverines who lost in the semi-finals against the eventual runners-up The Berlin Bears. He is one of 19 members of the GPL who has secured a sponsorship deal with a major online poker room or other poker related outlet.

The Moscow Wolverines will be back in action soon as the Global Poker League prepares for Season 2.

Wait, is that the right promo?

As Max Silver astutely points out, it looks like everyone is trying to nuke Las Vegas.

Dmitry Chop has taken down the partypoker LIVE Million event in Sochi and with it the top prize of $225,000.

Chop, from the Ukraine, outsmarted, outfought, and outflopped, a final table brimming to the top with Russian talent to take the first prize. The inaugural partypoker LIVE! Million event attracted 1,170 entrants making sure the $1m Guarantee was breached ($1,134,900).

Dmitry Chop is the champion of the 1st ever @partypokerlive Million! He cracked aces with Q10, hitting trip 10s on the flop. #partypokerLIVEpic.twitter.com/WDmXvvgPE1