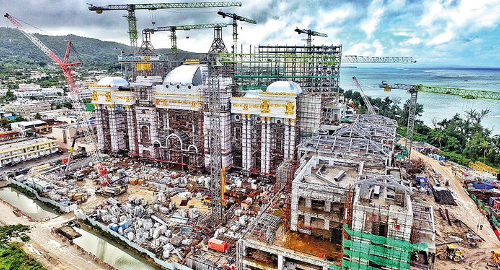 A construction worker has been killed at the site of Imperial Pacific International Holdings’ in-development permanent casino on Saipan.

On Wednesday, IPI announced that a 43-year-old Chinese national had died while working on IPI’s Imperial Pacific Resort Hotel Saipan (pictured). The unidentified worker reportedly fell from a scaffolding on Wednesday morning and later succumbed to his injuries.

IPI chairman Mark Brown extended condolences to the worker’s family, while expressing “serious concern” that its subcontractors “exercise Safety First at the construction site.” Brown also expressed concern regarding reports of workers who “infringe the law.”

This is the second serious disruption at the construction site in as many weeks, coming just eight days after work was halted due to a “trash fire” that was ignited by welding sparks falling on “construction material debris.”

In words that in hindsight sound ominously prophetic, Saipan Gov. Ralph Torres had commented on the progress of IPI’s permanent venue just one day before Wednesday’s fatal accident, saying “you can see construction activity and they have been working extremely hard. They are working 24 hours to meet the deadline.”

IPI holds the exclusive rights to operate casinos on Saipan, and currently operates a highly successful temporary casino, Best Sunshine Live, out of a high-end shopping mall. In February, IPI asked Gov. Torres for permission to delay the scheduled August 2017 opening of its permanent venue, citing a variety of factors beyond its control, including disruptions caused by 2015’s Typhoon Soudelor.

On Tuesday, Torres told the Saipan Tribune that he’d asked the CNMI Lottery Commission to grant IPI’s request for more time, based on Torres’ belief that the delays were caused by “reasons that [IPI] cannot avoid.”

Meanwhile, the runaway success of IPI’s temporary casino has elevated controlling shareholder Cui Lijie onto the Forbes’ billionaires list for the first time. Cui, who made her bones in China’s property market, was tied for 1,234th position on Forbes’ 2,043-strong list with an estimated net worth of $1.7b. Cui recently loaned IPI an additional $100m to ensure construction of its permanent gaming venue could continue.