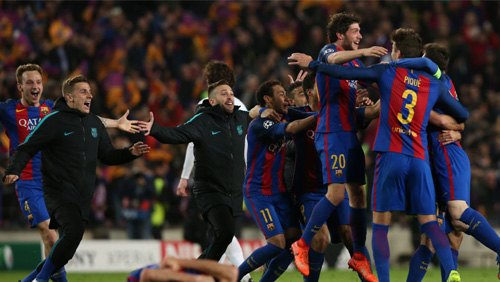 Lee Davy finishes off the week’s Champions League round-up with a sensational victory for Barcelona at the Nou Camp, and a stroll in the park for Borussia Dortmund in Germany.


The shock of Round of 16’s first leg ties had to be Barcelona’s tanning at the hands of Paris St Germain (PSG). The 4-0 loss sent shockwaves throughout world football. Luis Enrique was so tilted by the defeat he told the press he was stepping down at the end of the season. He should have slept on it.

No team had ever overturned a four-goal first leg deficit in the history of this great competition. But if anyone was going to break that record the way Jackie Chan breaks blocks of wood, it was Barcelona. Before the match, you could have gotten +3300 for Barcelona to win the Champions League; now they are the favourites.

Barcelona needed an early goal, and they got it thanks to a spot of six-yard pinball finished off by Luis Suarez. Barcelona was dominant and went in at half time 2-0 in front when an Andres Iniesta backheel ended up in the back of the net courtesy of a deflection from Layvin Kurzawa.

Then, five minutes after half-time, Neymar beat Thomas Meunier in the box. The Belgian right-back slipped, Neymar fell over him, and the official behind the goal gave the penalty after the referee had decided to play on. Lionel Messi stepped up to the plate and scored his 11th Champions League goal of the season, his 94th all time, only one behind Cristiano Ronaldo’s record.

Barcelona only needed a single goal to push the tie into extra time. But PSG knew, if they scored, Barcelona would need three, courtesy of the away goals rule, and that’s what happened after Edinson Cavani got on the end of a headed knock down to smash the ball past Marc-Andre ter Stegen in the Barcelona goal.

The diminutive PSG midfielder Marco Verratti would later tell the press that Barca players said that ‘it was all over’ after Cavani’s goal. The Uruguayan spurned the chance to make sure when he shot against ter Stegen when clean through on goal, and the hero of the first leg, Angel Di Maria, missed a sitter from six yards.

But as the game crept into the 88th minute, with Barcelona needing three goals, those missed chances didn’t seem to matter. Or so we thought. Neymar, who wasn’t at his best throughout the match, was fouled on the left-hand side of the penalty area. The PokerStars sponsored ace dusted himself off and curled a sweet free kick into the top of the net.

Then with the tie running into injury time, Luis Suarez dived in the box, and the referee pointed to the spot when he should have sent Suarez off. Curiously, it was Neymar who took the penalty and not Messi, and the Brazilian evened the tie at 5-5 on aggregate, 5-1 on the night.

Barcelona threw the kitchen sink, the dishwasher, and even ter Stegen at the PSG defence, and it was a foul on the big keeper that led to a moment of magic. Neymar found space on the right; floated a dream ball over the PSG defence, and there was the substitute, Sergi Roberto, to create history with his first goal in 18 months, sparking scenes like this:

Incredible scenes!! This is why we absolutely love football. @MogutsFCBpic.twitter.com/RygBqj9VSl

I wonder how Luis Enrique feels about that decision to quit?

Dortmund Cruise at Home to Benfica

I don’t think anyone thought Dortmund would go out despite losing 1-0 in Portugal. They would have won that game easily had Pierre-Emerick Aubameyang had his shooting boots on. Fortunately for the Germans, he decided to wear them on a fervent night in the Westfalenstadion.

Dortmund emerged from the group stages as the leading scorers, and they showed why with a 4-0 demolition job on Benfica. Aubameyang scored three, and Christian Pulisic scored his first Champions League goal with a neat chip over the Benfica keeper to put them into the hat for the quarter-finals. Not many teams will want a fight with the Germans.