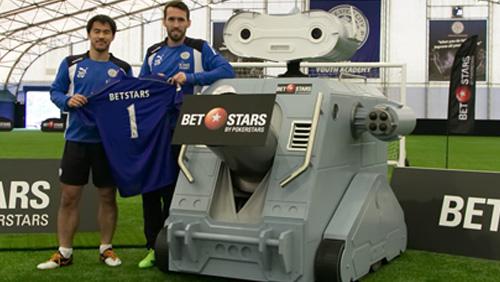 Amaya Gaming’s sports betting arm, BetStars, has joined the fisticuffs against match-fixers by becoming a part of ESSA, and roll out another video in their #Callit campaign featuring Premier League Champions Leicester City.

nd of goody two shoes over at the sports betting integrity outfit ESSA.

The move follows 888Holding’s decision to join forces with 23 like-minded gambling entities last month. Amaya has over 108 million registered users across its brand, so it’s a coup for the integrity of ESSA. Other high-profile members include BetVictor, Bwin, Betway, Ladbrokes Coral Group, Paddy Power Betfair, and Sky Bet.

ESSA is a non-profit organisation designed to deter betting-related match fixing in sports. It achieves this goal through the use of their Internal Control System (ICS) and Early Warning System (EWS).

In 2016, ESSA reported 160 cases of dodgy looking sports bets. Tennis was the biggest culprit with 103 cases. Football was the second-highest with 16, followed by piddly numbers from Volleyball, Table Tennis, Handball, Beach Volleyball, Snooker, and Basketball.

Europe had the biggest problem with 71 cases (45 of which were tennis related). There were 25 issues in Asia (24 tennis), 12 in Africa, 14 in South America, and one in an undetermined country meaning our astronauts must have had a dodgy game of Table Tennis on the International Space Station (ISS).

ESSA shares their information with the likes of FIFA and the International Olympics Committee (IOC) along with the prominent gaming regulators from around the world.


After losing six of their last eight matches, it’s little wonder that you could get 70/1 on BetStars for a Leicester City victory at the Ramón Sánchez Pizjuán Stadium on Wednesday night.

BetStars are the official European sports betting partner of choice for the English champions and chose the eve of their Champions League clash with Sevilla to release their latest #Callit promotion where several members of the Foxes take part in unique challenges set by the BetStars team.

In the latest challenge, Christian Fuchs and Shinji Okazaki, stepped up to the plate to take on a soccer ball firing robot that suffers from premature ejaculation.

“We wanted to challenge the Leicester City players to face-off against the ultimate football machine to see how they would fair,” Said Zeno Ossko, BetStars’ Director of Sportsbook.


Who won the challenge?

Find out for yourself.