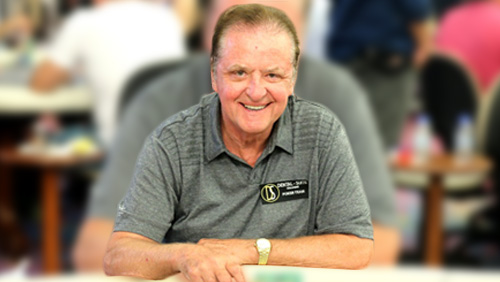 Pierre Neuville has won his prop bet to crack the Global Poker Index Top 50 with four months to spare after playing in 150 tournaments in 2016, cashing in 25% of them.

Pierre Neuville is full of shocks.

The Belgian Santa Claus made the November Nine in his 70s.

And he has now won his prop bet to squeeze into the Global Poker Index (GPI) Top 50 with four months to spare.

Inspired by the likes of pro-betting fanatic Antonio Esfandiari (pot pissing exempt), Neuville decided he wanted in on the action and bet €500 with a friend that he would make the Top 50 of the GPI by June 30, 2017. He was ranked 142nd at the time.

“I have just made my first prop bet of my life!” Neuville told PokerNews at the time.

Neuville broadcast his bet on social media, and more people wanted in on the action, so the Belgian septuagenarian opened up a separate bank account and pledged to take $50,000 in bets with $10,000 the single largest bet he would accept.

There were 12 bets in total, although Neuville doesn’t stipulate the amount, and he made #47 in the GPI on February 15. Neuville told PokerNews that he played 150 tournaments in 2016 and that his ITM record is around 25%.

Since making the bet, Neuville has cashed in 26 events with buy-ins ranging from $220 to $10,300, with his biggest success coming in the €10,300 High Roller at the European Poker Tour (EPT) in Malta finishing runner-up to Stefan Jedlicka for a €228,400 payout.

Neuville plans on competing in a minimum of 175 tournaments in 2017, but he won’t be appearing in too many PokerStars Live events. The Belgian made his name on the European Poker Tour (EPT) where his uncanny ability to satellite into every Main Event led to a relationship between the pair with Stars crowning him “Friend of PokerStars.’

Things have turned sour since those days. Neuville told PokerNews that he would be playing less PokerStars Championships and Festivals because ‘arrogant guys like Thomas Lamatsch think they are the king with no respect for the player.’

According to his Linkedin profile, Lamatsch has worked with PokerStars since January 2005 and is currently a Consultant and Tournament Director Europe.

Neuville also told PokerNews that he intends to play in more high stakes buy-in events after deciding to go into the world of staking for the first time.

You can read the full interview with Pierre Neuville, right here.