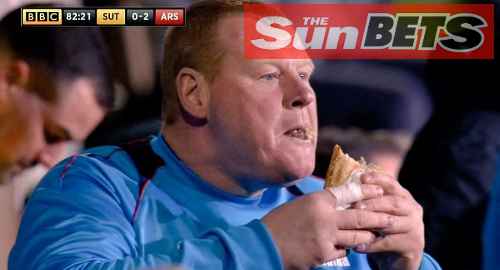 A football goalkeeper’s consumption of a meat-and-potato pie on live television has sparked a UK Gambling Commission inquiry.

This weekend, UK sports fans were treated to the sight of Sutton United reserve keeper Wayne Shaw riding the pine during his team’s FA Cup match against Arsenal. At one point late in the match, the 23-stone (322 lb.), 45-year-old Shaw can be clearly seen consuming a meat pie.

Trouble is, Sun Bets, the UK-licensed online betting brand of Australian wagering operator Tabcorp, had a prop betting market offering 8:1 odds that Shaw would indeed eat a pie during the game. Sun Bets had also sponsored Sutton for the match.

Shaw later told the media that he was aware of the Sun Bets market and that, while he himself didn’t place a bet, “a few of the mates and a few of the fans” may have wagered that he would eat as advertised. Shaw claimed that he’d only decided to eat the pie once his team had made all its substitutions.

The ensuing ruckus has prompted both the UKGC and The Football Association to open investigations into whether anyone unduly profited from Shaw’s gastronomic stunt. Sun Bets says it paid out a total “five-figure” sum to bettors who bet on Shaw’s appetite getting the better of him.

UKGC enforcement director Richard Watson wasn’t amused, saying “integrity in sport is not a joke.” Watson said the UKGC would be “looking into any irregularity in the betting market and establishing whether the operator has met its license requirement to conduct its business with integrity.”

An FA spokesperson said it too would be looking “to establish whether there has been any breach of The FA rules relating to betting.” Those rules state that players must not “instruct, permit, cause or enable” other individuals to bet on any aspect of a football match. Late Tuesday, it was announced that Sutton United had asked for and received Shaw’s resignation.

Sun Bets, which launched in the UK last summer, issued a statement insisting it was “a responsible operator” and as such it would assist the UKGC in its investigation and also carry out its own internal investigation. Until the results of those probes are in, the company said it wouldn’t be commenting further.

The massive media coverage of Shaw’s apparent gaming of the system could have wide repercussions for UK operators’ prop betting markets. Last June, the UKGC warned its licensees about the difficulty in upholding the integrity of their novelty betting markets and warned that future shenanigans could result in operators being subjected to licensing reviews.

So we strongly urge US President Donald Trump to act quickly to cash in on UK bookmakers’ odds that he’ll quit before his first term is up, or for federal GOP lawmakers to make a quick buck by deciding to impeach their Buffoon in Chief. Seriously, do it now.