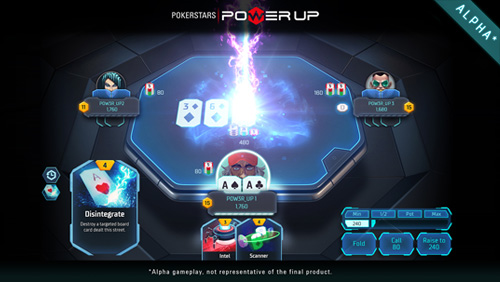 As PokerStars prepare to launch their industry-changing product, PokerStars Power Up, Lee Davy gives his two cents on why he believes it’s going to be a game changer.


I was reading an article about the games the World Series of Poker (WSOP) need to introduce to shake things up a bit. One of them was Badugi. It made me think of innovators in the world of eSports considering bringing out a new version of Frogger or Manic Miner to spice things up a bit.

Real innovation in poker is as rare as a witch without a broomstick. Full Tilt’s Rush Poker falls into that category. Expresso Poker by Winamax is another. And now it’s the turn of PokerStars to take the game to another level.

Writing in the PokerStars Corporate Blog, Severin Rasset, PokerStars Director of Poker Innovation and Operations, has given the poker community a voyeuristic peek at a new game called PokerStars Power Up.

The game uses poker rules as the core operating system with an infusion of Hearthstone and Magic the Gathering style additives designed to create a more dynamic game.

Mousetrap, Pictionary, Buckaroo – they are all games that create a thought, that leads to a feeling of joy and wonder, that leads to the emergence of good old-fashioned competitive fun.

Once you have played poker for money, it’s difficult to recreate these feelings and emotions. I think PokerStars Power Up changes that. I don’t believe that you will need to play for real money to enjoy this game.

The game uses additional ‘cards’ or ‘power ups’ that allow you to change the dynamic of the match. In the preview below you will see cards called Clone, Disintegrate, EMP, Engineer, Intel, Reload, Scanner, Upgrade, and X-Ray.

Introducing these cards into the game increases the meta-game and creates a whole new level of skilful actions and counter-actions. Most importantly, it makes the game visually exciting for spectators, and if PokerStars wishes to fill stadiums at live events in the same way that eSports tournaments do, then it’s imperative that this happens.

The new game is another move towards levelling the playing field between the men and women who make a living from the game and people like me who want to pop in and blow off some steam after spending all day getting your hair pulled by a four-month-old.

“The common goal of these innovations is to continue to maintain a high level of engagement from our active players, to reactivate players that may be tired of playing poker as it is today, and to speak to potential players that haven’t discovered the game yet.” Writes Rasset.


PokerStars isn’t the first company in the poker industry to create a poker/video game hybrid. Global Poker Everything God, Alex Dreyfus, was the first to come out and say that poker needed a kick in the ass, and to do something about it when his team created HoldemX, a poker based game with the addition of Power Up cards.

PokerStars Power Up is now running alongside HoldemX in the game changers 100m sprint and they both have what it takes to be a success, and when they are, the whole landscape changes. It’s funny, in the past few weeks, I have been writing about AI being the death of online poker as we know it, but I think innovative ideas like PokerStars Power Up will stick a knife in the spinal column much quicker.

Once PokerStars come out of Alpha status and releases the game to their community nature will take its course. Every single online poker operator in the world will create their version, call it something different, and soon people will laugh at anyone wanting to play No-Limit Hold’em in the same way my son does when I talk about Frogger.